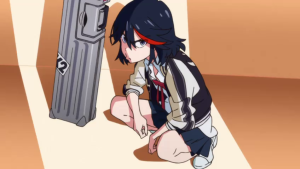 The setting is Honnouji Academy, a highschool where the student council has ultimate control over the entire school faculty and students. Enter Ryuko Matoi, a transfer student hell-bent on finding the murderer of her scientist father, Isshin. She finds a battle uniform Kamui [God’s clothes] that enhances her abilities in combat. Throughout she fights different club members of the school hierarchy, climbing her way to the top to Satsuki Kiryuin in search of the truth.

This series thus far has been an homage to Revolutionary Girl Utena with the power of school society portrayed in this. Especially when in Episode 4 Ryuko has to make it to school in time or she will be expelled. This episode really made use of the different grade levels within the school, the importance of the Kamui and Goku uniforms, and how those outfits play out in effecting the wide range of characters in this series. It can be a bit formulaic for the first couple of episodes; Ryuko vs. club member one after the other each episode, but around episode 5 the series branches into a side character, Tsumugu Kingase of Nudist Beach, which if you haven’t seen this episode, it’s definitely one NOT to miss out on. The comedy is really a push comes to shove routine that can be very hilarious at times with one of the best minor characters of the show, Mako Mankanshoku. I have been very impressed with how intensified this series is with its action scenes, and the music most notably helps that in a big big way. Hiroyuki Sawano is one incredible composer that really broke out in the scene with I am going to say it, Guilty Crown. One of his best soundtracks has to be from last year’s Attack on Titan. Overall, I would say this series is a wonderfully, action-infused roller-coaster ride of excitement. I feel like just about every episode it doesn’t stop and when the action does the drama intensifies with its dialogue and the sound effects. Everything is on a grand scale with this series.

Characters: 10/10 A well balanced range of characters from funny, to serious, to whimsical that help give the main character the push she needs to be stronger and discover herself and the power she has with Senketsu.

Setting: 7/10 A high-school city that everything is capitalized on clothing within the school. Outside of the school is the desolate wasteland of a city with thug middle-schoolers, crazy families, and a giant trolly, yes a giant trolly.

Music: 9/10 Hiroyuki Sawano has done it again! The soundtrack to the first half of this series really personifies the struggles Ryuko has, and the battles that lie in wait for her ahead. Super intensified with a nice mix of classical music thanks to Nonon Jakuzure’s marching band.

YOU CAN WATCH THIS ANIME SERIES on Crunchyroll today!