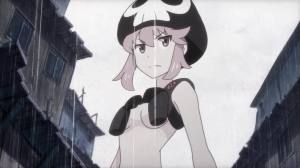 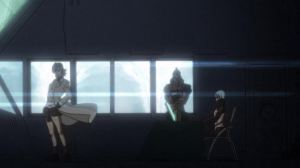 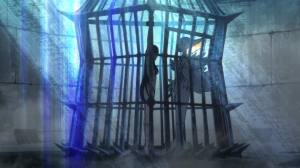 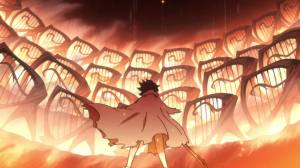 Just to let you all know I won’t have a review up yet for Samurai Flamenco Episode 18 due to the delay in broadcast from the Olympics. I will have a review sometime after its airing next week. Now on to Kill La Kill’s latest episode. This series still manages to be intense, but right at the end of that huge battle everything seemed to quiet down. GAINAX sure knows how to pull subtlety very well. The flashback and reveal of Isshin Matoi was a big surprise to me and one that I did not see coming one bit. The action was paced evenly-well throughout. I originally believed Mako would be subdued for a few episodes, leaving Ryuko to save her in the end. That was definitely not the case. This left quite  shock to me, because up until now, this series has been very predictable.  After being captured by a REVOCS, Mako still managed to be saved by one of the Elite Four. I have to admit I really enjoyed Gamagori’s character this episode a lot. The comedy between him and Mataro’s wish to have her sister saved was outstanding! These past few episodes have not only been intense, but the acting has been improved greatly over many previous episodes. Keep it up! I ended up watching this episode twice because Ragyo’s voice sounded vaguely familiar. Romi Park voices Ragyo, and has done many notable anime roles including Hamyuts Meseta from Tatakau Shisho The Book of Bantorra, and Edward Elric from Full Metal Alchemist! With only 4 more episodes left, I will be curious to see how Ryuko and Senketsu will end up by the end of it all. In early September the final Blu-Ray volume will be out and include an OVA that won’t air on TV. I hope they don’t ruin it with a beach episode, like Highschool of the Dead.

-a mix of subtlety and action put together perfectly!

-The time jump was a nice addition considering what occurred in the previous episode.

YOU CAN WATCH THIS ANIME SERIES on Crunchyroll today!