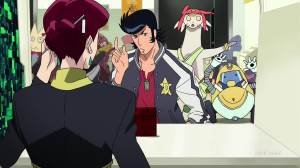 This show reminds me so much how I rate my Top 10 Best Anime Series, I am not going to jump the gun right now and say this is in that list, but it is in the Top of best anime to air this winter season. Great way to start off 2014! It is a shame we have to wait until July for the second season, but that just makes this series that much sweeter when it arrives! I typically enjoy a series if I know that I can re-watch episodes and still find it quite enjoyable. Space Dandy is that kind of series, whimsically funny, smart yet it still maintains a string of episodic stories that bridge together quite well. The series is crafted together so well, and episodes 11 and 12 continue this feeling somewhat….

This episode’s art direction was fantastic! Once the story of the box began its opening arrival the sepia tones emerged. Black and white mixed with a shade of color was a great way to illustrate that this episode may have happened to Space Dandy and crew more than once. Very neat homage to Episode 10, and the underlining theme that Dandy’s encounters might just be parallel universes. I noticed this towards the later half of the episode when Dandy gives Scarlet the box just like the beginning of the episode. Dandy is not the big idiot I initially thought he was. This episode along with 5, 8, and 9 proves that he knows just what he is doing. Firing that blast at the fleet may have been idiotic but Dandy knew full well that this was the only way to get out of the situation “without being blasted in tiny itty bitty pieces” [reference to Dandy’s line in Episode 7]. This had a varied range of development for not just Dandy, but Dr. Gel as well. His dabbling in his scientific studies delivered what even Admiral Perry thought, “that I even forget he is a gifted scientist” a wonderful change in Dr. Gel. One thing I expected the narrator to do was to explain the equation Dr. Gel was working on throughout the episode that resulted in boobies are the key to the universe and Dandy solved it. This was not the case, and as such it was very refreshing not to have the explanation on it. I am sure this power Dandy possesses will be explained in the second season but for now its been nicely hidden as the root of the story under all these comedic episodes. 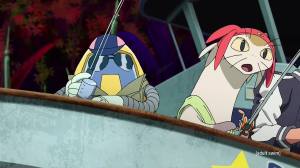 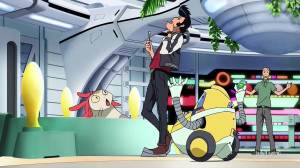 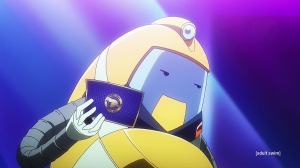 This episode was pure comedy, and satisfyingly enjoyable. It wasn’t my favorite episode out of what has aired in the series, but nonetheless it was still pretty funny. QT’s new found enjoyment in fishing was probably the least funny segment of this episode. What a wonderful way to tie it in though! Hey gang let’s go to planet that looks like it would have chameleons and catch one!  Dandy’s comment on QT’s odd love for catching tsuchinoko left this whole scene wonderfully, and a nice transition into the stowaway incident. This whole episode just once again display Dandy’s stupidity down to a tee. Watanabe has a gift of shifting between types of comedy in this show. It started out from stupidity to a battle of wits between friends and then psychological questioning without ever stopping. The Aloha Oe served as the background for the majority of this episode, with a little bit of cuts into the registration center. THOSE scenes with Scarlett were hilarious! It would have been nice to see some different planets or the boobies restaurants with this situation. All in all, this was one of the best written scripts in this series, because the banter between Dandy, Meow and QT searching for “another” on board was comedic genius!

[Screenshots from these episodes were taken from the English version]