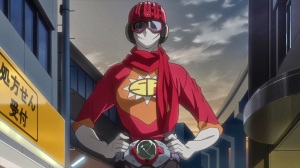 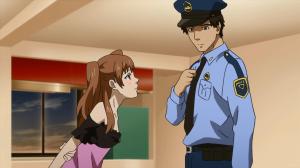 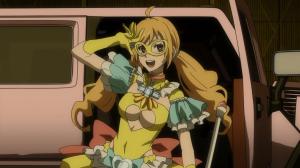 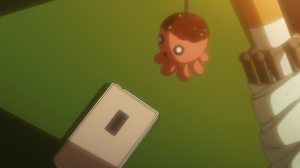 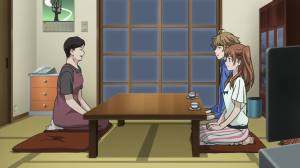 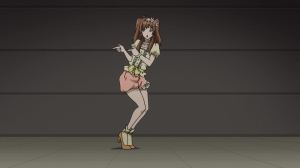 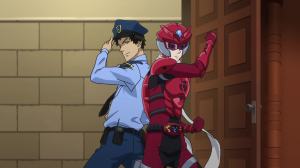 So I am slowly getting my final impressions out for some of these series. Space Dandy final review should show up in the next few days or so. The initial reason why I started this blog was to create a kind of anime inventory of what I have seen. After putting up a few posts, I am starting to view anime in a different light, not just for the entertainment factor, but a lot more expressively. There are a lot more trends that anime series seem to follow that I have noticed a lot more and more. I have seen some really well-done series like Cowboy Bebop, The Tatami Galaxy, and Noein are to name just a few, and some poorly crafted ones as well. Fractale, Guilty Crown and Mahō Senshi Riui all had potential but fell flat. Fractale and Samurai Flamenco followed the mold of “not knowing what to be”. These two shows were for the majority of their run well executed, yet for some reason or another there was an element [Fractale – ending, and change in direction of characters; Samurai Flamenco – further story development] to their stories that didn’t sell well for me at least. I will say now that Samurai Flamenco is without a doubt a much much better series than Fractale. Just want to be clear on that before I continue on here. Also I want to point out that this is my personal opinion on these series subjectively.

When animation studios jump ship and drop conventions for the sake of being different. Unorthodox animation like Kemonozume and Flowers of Evil were series that declassified every kind of stereotype in anime out the window. Samurai Flamenco chose this route not so much in animation, but in its superhero genre. Going back to Flowers of Evil and Kemonozume, their stories were compelling and gave some real color to its cast of characters. Flowers of Evil spent in Episode 8 five whole minutes of just walking. The camera angles in that scene were not used a whole lot in anime series, and this was definitely out of the norm. I guess what I am getting at here is shows should strive to be unique and develop a style of their own that anime hasn’t seen before. Episodic anime series are a wonderful framework and Mushishi as well as Space Dandy are great examples of this.  [Can’t wait for that second season of Mushishi later this week] Noitamina is a broadcasting company that specializes in this field, well, aside from the few exceptions, they flourish in creative series. This is a hook into the series I am going to talk about here.

If someone asked me two describe Samurai Flamenco I would say “strangely obscure”. This is a certainty with its plot changes, lively characters and tropes. There really has not been a series out there like this one. Solely on its storytelling and its characters. Masayoshi  started out as average dreamer, his occupation of a male model was something to write home about. This delivered an entirely different element to the superhero genre and a main character as a whole. How fitting that he could get those Samurai Flamenco costumes designed, and land small TV roles in sentai series. Samurai Flamenco was an homage to the genre of tokusatsu genre, and played on this wonderfully. For the first 6 episodes, Goto and Masayoshi’s bonding to become a “friendship of a lifetime”, with the help of a great script and seiyuu. The acting in this was so well done from beginning to end and it really made these characters come alive. Episode 3 is one of my favorites because it took a hokey character like Kaname and completely dismantled the superhero! Such a great way to use superhero tropes, only to break them down! Goto’s reveal of all those texts messages being from himself; lying to himself that his girlfriend was still alive and hadn’t disappeared. These were the shining moments in Samurai Flamenco that really expressed a bigger picture in the story.

Beyond Flamenco made a valid point to follow this by saying “We’re all crazy, different kinds of crazy, but it depends on the level of crazy”. This hit home for this series, because it had thrown two average main characters in an average world only to develop all of it brash yet effective. At the beginning, nothing was interesting aside from the fact that one of them, Masayoshi wanted to be a superhero. Then, Samurai Flamenco was actually formed, and put into action. This built up to change the average world into a world that had only been seen on television shows. This series did a fantastic job at poking fun at so many different genres! We had romance developing between Goto and Mari that brought on great comedy! There were also the King Torture scenes that fit a slice of horror in the mix. The Flamengers delivered the Sentai arc of this series. It was almost as if this series was a pun on shonen series like BLEACH or Naruto. The long-running series that had action, comedy, drama, horror, all fit into 300+ episodes. Samurai Flamenco managed to pull this off in 22, where some episodes were very good, and some were complete cheese. This felt as though it was done intentional for the sake of Masayoshi being in a tv series throughout the whole thing. This wasn’t the case.

Between Episodes 7-18 the series posed the question “What if stereotypical villains came to invade Earth?”. Around Episode 15 or 16, it asked another question “Was all this really happening” considering Beyond Flamenco’s appearance made me question Masayoshi’s true nature and intentions of idolizing superheroes. This played greatly on the part of Goto’s role. He was so absent after Masayoshi became a Flamenger, because that is all Masayoshi had seen as important in his life. It was like the series was in Masayoshi’s mind, and the people in his life that mattered before and didn’t matter now, were absent from the series entirely. This wasn’t until reality set in and Masayoshi needed help, when Goto finally appeared again. What a great way to bring back Goto! His strength basically saved this series from having dismal characters, he was the backbone Masayoshi didn’t have. This provided a wonderful balance between the two characters, and allowed for fantastic chemistry on screen. This was shattered in Episode 19, when Mari and Masayoshi learned about his text messages. Goto was losing the only strength he had which was his girlfriend, and he held on to it so tightly. Sawada toyed with his emotions so well by deleting his messages, and erasing her very existence. Such a great villain, yet horrible way to fake his death and his parents didn’t say anything to anyone?!

The strange part of this was the ending of the series when the first half elaborated more on this, and the second half completely jumped ship to somehow bring everything full circle. This series was a great homage to the superhero genre and played on this so well! It wasn’t until the ending that it “didn’t know what it was”. The ending was a little bit rushed to bring things together, yet so many questions remained. Where did Goto’s girlfriend disappear to or is she dead? Mari never really resolved her feelings with Goto, Masayoshi never tackled the idea of being with his manager. It would be nice to have another season of this, or perhaps a film to explain some of these questions.

Aside from those, this series delivered on everything as messy as it was. It went from normal to crazy in 21 episodes, and then back to normal again coming full circle. Such an interesting contrast to see using Masayoshi as the focal point of it all. Would really have been great as I said in my previous post if Goto had been the perspective throughout the entire series.

Also, on a side note I am going to try to add a rating system scale to the series I finish reviewing and categorize it that way. Let me know what you all think.