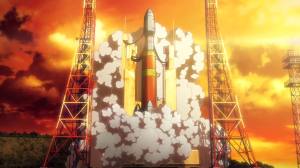 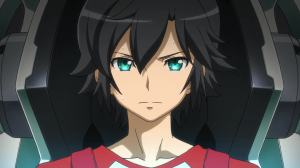 STORY: The hero destined just as his father was to become a Captain, pilots a giant robot to fight off other humans(aliens?) in order to save Earth.

Since this is the first series for an initial impression, I think the format for it will be a percentage rating as to how likely I will blog this series, if its 50% or above I will blog the series, if below this then I will not. I will try to catch up on Kill La Kill as well.

When I first saw the PVs for this I thought to myself “Oh great, a series that looks, acts, and sounds just like STAR DRIVER”. Don’t get me wrong, I really thought Star Driver was a pretty neat series for what it was. Highschool kids pilot giant robots to save the world from another group of highschool kids pilot giant robots. Star Driver as a premise may have sounded bland, its presentation is what made this series really cool. I just didn’t want to see another one exactly like it. Same studio BONES same writers and creators are doing Captain Earth. Was not really expecting something special out of this new show. I was wrong. This first episode puts the hero [Daichi Manatsu] through various flashbacks from when he was a child. His encounter with Teppei his new found friend, and the girl they found deep inside the (government?) facility stuck inside of a bubble-like substance. As a first episode this was an awesome episode! It panned back and forth between past and present giving us hints as what is to come in later episodes. The one thing I did not like was the usual Father like son captain scenario. If the father is one, then the son must become one too. Hopefully there will be some change in direction as to why he is presumably going to be a Captain. What a very inventive way to bring the robot into it, by being put inside of a rocket only then to add on the parts to that giant robot, by flying through orbital space rings! Very creative!