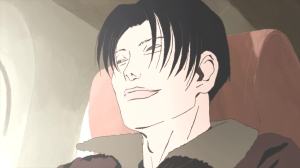 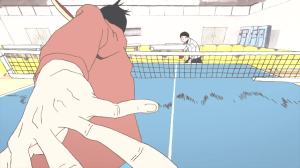 STORY: A series about ping-pong.

Finally! The two Noitamina series have aired! The first one Ping-Pong The Animation adapts Taiyou Matsumoto’s manga. This was one hell of an episode here! Yuasa Masaaki was a perfect fit for director here! Masaaki is known for his awkward writing style, camera angles, creativity and animation style. The art here is certainly something I would like to see more of in Noitamina! Exceedingly brilliant! As some of you may know he’s directed quite a few great series. Kemonozume, Kaiba, and Tatami Galaxy. Even some feature films like Mind Game and the most recent Kickstarter funded project Kick-Heart. I would love to see this guy direct a Josei series!

Moving on to Ping Pong. Was this episode only 24 minutes? It seemed a lot longer than that! Peco has got to be my favorite character here, because he left the episode with so much development. At first he was a complete jerk but his friendship with Smile allowed a more genuine side to come out. So much depth to all these characters and we have yet to see what Smile is all about and his supposed skill at pong. More than half the episode was done in Chinese! Looked up the voice actor for Kong Wenge and he is chinese and the only anime role he’s ever done! Wow!

Weng was one tough adversary here for Peco, destroying him both physically in the match and psychologically dismantling his skill as a pong player. What a tense pong match combined with very fluid animation! The music played a huge role in defining what kind of player Wenge was. Not only that but Peco’s hope and determination to win only to be astonished by his opponent’s skill at the game. That scene transitions here were incredible especially when it switch from in to gymnasium to up on the roof, wow! You really could get a feel here of how GOOD Wenge really is just by his sense of hearing. Very inventive in foreshadowing here.

Interestingly enough was Smile’s avoidance at any sort of personal contact with other players, a sort of disconnect that I am sure will play a role much later in this show. This will definitely be a show to watch out for this season!