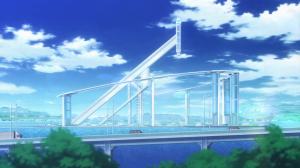 STORY: Juugo was disowned by his father and forced to transfer to a high school on the “Special Student Zone,” an artificial island. With only 40,000 yen a month to live on, Juugo chooses a low-rent apartment that happens to be haunted by Nanana. Juugo and members of the school’s adventure club join a “treasure hunt royale” on the island for the Nanana Collection, a treasure that possesses a mysterious power.

So this is Noitamina’s second series to air this spring. The girl wasn’t as annoying as I thought she would be. Just like Captain Earth’s first episode was able to pull off, the few characters that were shown in this episode left subtle hints leading much more is behind the scenes than we know about this artificial island. The manager looks like she has some secrets. This always creates a solid introduction into a series, and the fact that this is about treasure hunting provides an even more concrete foundation to some interesting side plots. My only concern with a series like this is the length it has in being able to use that to its advantage to tell a clear concise story without derailing.

However, it gently explained Nanana was a ghost and there really were no over the top moments. This was quite refreshing! This episode was very light-hearted for a mystery adventure series that its supposed to be. Jugo allowed for some very comedic moments with Nanana; I really did not expect him to choose in getting his arm dislocated just to cop a feel on her. This left me very surprised and laughing so hard. The one thing I will point out here is the fanservice. This episode had quite a lot of it. Between the manager’s shots and Nanana’s that seemed unnecessary. However, in this case it wasn’t shoved down our throats. The overall presentation did not fail miserably quite like how some anime series do.

The OP was strange for this, the timing between the music and the animation did not seem like it pieced together. Perhaps it will grow on me. The ED was absolutely adorable!

After seeing this episode I can see why this is a Noitamina series. I really like the premise for this. So many stories interwoven into one. First we have the girl who was murdered and became a ghost. Secondly, we have the artificial island. Why is it there? Third and lastly is Nanana’s hidden treasure stretched all over the island. If the episode direction is done right in this series it could be a nicely short well-written series.