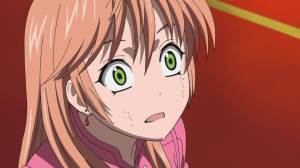 So I ended up spoiling myself by reading the manga of the first few chapters of this series. I will avoid any further spoilers past the anime for non-manga readers. King Livius played off of Nike very well.

This episode I felt was less cheesier than the first episode, because it explored Nike’s charm in a whole new light. Finding out the man she is to marry is that of a boy, to wind up in jail by him, and taking an arrow for him! She doesn’t give up on the kindness of others. I can now see how she reminded me of Kyoko Mogami of Skip Beat! Helping others regardless of their own actions and ideals. As we learned this episode, Livius finds war and fighting to be entertaining, portraying that the world isn’t beautiful. [Hence the title of the series]

Nike is in her own world when it comes to things of the natural world, this was developed so well with her admiration for flowers. If you stand back and really take a look at everything that you’ve conquered it doesn’t matter. It’s too trivial, at least in the eyes of Livius.

Of course the monumental reasoning behind this was the assassination of his mother 3 years prior. I have to say that is the one thing that was overplayed this episode. We get how she was a big impact on his life but using the same scene over and over was a tad bit overkill.

Finally seeing Nike’s rain power in action was very cool! The power of song brings a sort of enchantment to the ability that she has, and a shojo series like this illustrated this extremely well!

Didn’t notice this until the second time I watched the OP, but none of the characters other than Nike are featured in Episode 1! Episode 2 they’ve added in the characters to it, great attention to detail there! Looks like the creators didn’t want to spoil the story through the OP on the first episode!