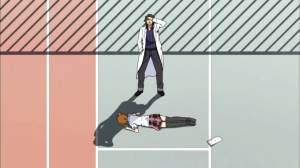 I am quite behind on writing posts, I haven’t even started with finishing up Kill La Kill’s review as I’ve been wanting to get out all the first impressions of series airing this spring. Selector Infected WIXOSS I know I still need to review last week’s episode 2 and this week’s episode 3. Granted WIXOSS has gotten off to a stale start, as well as Soul Eater NOT. I will hopefully have some of those reviews out soon.  Now on to Mekaku, that was a step down from last week. I really enjoyed the chemistry between Shintaro and Ene, and them being left out was disappointing. The only character shining in this was the main lead Momo Kisaragi. She was hilarious in this and those insults by her teacher regarding her grades reminded me of Senjougahara’s behavior towards Araragi in Bakemonogatari.

SHAFT loves to copy and paste, and I could really see that in this episode. They once again did the head tilt signature animation that has been in practically all of their works. However, it is starting to get rather annoying. The scene with the kid and Momo towards the end was great, it really played on one of the themes this episode. Status. Throughout the episode we learned that Momo had no friends even though her idol popularity rose by an unexplainable yet mysterious power to attract crowds of people when she is out in the city. This along with her incompetency in academics developed a nice balance to her overall struggle in living which directly poses the question “Does popularity further your own goals? Well for Momo I’m not sure she knows what it is that she wants for her future, only that she is freaked out by attention.

The kid which being fully animated gives way that he’s integral to the series. Usually this is done with SHAFT series. Another recycling tool they tend to use. He really had no idea who she was which I think left a shock to Momo. Interesting cliffhanger with the mysterious figure searching for her following orders by some organization.

I did some further research into this series, and I didn’t know which in this episode did not explain it clearly that she was the younger brother of Shintaro from the first episode. This really paints a picture for the family. Their mother died, so as a result Shintaro is a shut-in who plays videogames and has a strong connection with his own digital life. Whereas Momo chose to become an idol because she thought it would be interesting and possibly fun. This looked like to me, given the flashback of the mom and the idol producer that this was an almost lashing out in some way because the mother died. So the two siblings have human relationship issues, I wonder how they react with each other. What a way to demolish Momo’s personality only to build her up again. This allows for some very intriguing episodes in the future. It just is a shame that this series so far hasn’t been able to have a strong coherent structure. This episode had a bit of an issue with that. There’s no timeline. Sometime that works, but for a SHAFT production I feel its quite necessary. I do have to wonder if each episode is going to be from the perspective of a different character, if so, it would be really neat to see this all tie together especially with how we left Shintaro and Ene.

That musical number at the end was the best! Really well animated and if SHAFT took the time to animate the whole series like that and how they’ve done with Nisekoi getting the story across on these episodes thus far would have landed a much better rating. Very catchy song with the witty lyrics playing off as a narrative of the episode. Hahaha! Great writing there! Come to think of it it would be very neat to see a more predominant anime musical series. Red Garden had a few scenes but not a ton of exposure with the genre. THAT would really be a sight to see.

Also looked like the OP animation was different and the song along with the animation for the ED was completely different. Not as good as last week’s ED, still it was different as it convey the overall tone of the episode.

A side note, its really fascinating that this episode and the 2nd episode of Mushishi Zoku Shou shared the same underlining theme of human connection. In retrospect, from an anime viewpoint how much general directors and even episode directors can change the whole dynamic of source material which play a vital role in adapting manga most notably light novels and manga.