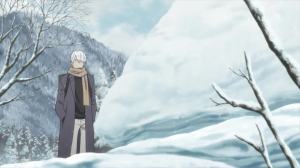 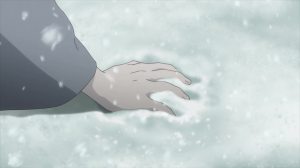 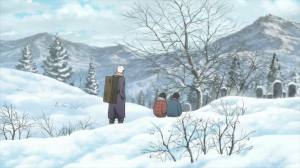 Yes! This was awesome here! This is why Mushishi remains in my Top 10 Best Anime Series, even Top 5! Heartbreaking! The episode director here did a wonderful job in conveying an atmosphere outshining every episode so far!

Sachi’s death had left quite a scar on Toki both psychologically and physically. Having a background of a snow village really helped set the scene here that the Tokoyuki possessed Toki. Not only was he unable to get over the death of his sister but his relentlessness in searching for her believing that she had not passed away and was stuck under the ice. So compelling here!

What made this episode even more interesting was that what brought on by Toki’s drive to keep looking for her was his unusual ability to feel cold. The warmth from hugging others and the fire inside the house was something he could not bare to stand. This was due to the Tokoyuki. A mushi that acts as a host within a human or animal making it feel extremely cold and creating an illusion of the senses. Right here! Right here was what I really loved about this episode. The Tokoyuki not only was able to mask his senses but in his own mind he couldn’t let go, and did not want help from the other people in the village. Such irony here!

Ginko handled this situation very very well here. Even though Toki was going to lose arms and legs [from frostbite] that did not stop him from going out into the cold. Ginko spoke through to the villagers especially Toki’s best friend Tae to get the message across. This wasn’t about Ginko saving Toki but the people from his own life in the village helping him move on. This really was without a doubt the best episode of the second season so far!

I am looking forward to how the rest of this series turns out, with how episodic it is! Also from what I have read this will be split cour. The second half is going to return in the fall. That will make for a nice addition to the fall lineup. Psycho-Pass season 2, Shigatsu wa Kimi no Uso, and Kiseijuu. Awesome!