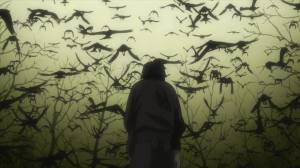 What is going on with this spring season? Last season we only had about two series that were truly exceptional. Space Dandy and Gin no Saji 2nd Season. While the 2-cour series Samurai Flamenco remained completely different it was its ending that fell flat. All the rest that were brand new for the season weren’t too experimental in their process or the premise of these series were too much alike. Here, we are at the Spring 2014 anime season, and we have some very good series! Ping Pong The Animation, a series about Ping Pong that would otherwise be incredibly boring if not told the right way, but Yuasa’s forte in art direction and storytelling gives the anime adaptation full of life! Still it isn’t just him that provided an entirely unique experience but the episode directors as well. Soredemo Sekai wa Utsukushii is a strong shoujo series so far [aside from its 4th episode], that allows the comedy to be entirely fresh and new, yet still provides an interesting story underneath it all. M3 Sono Kuroki Hagane’s first episode gave such a twist on teenager mech series! We jumped right into the training with the story, and the character designs are some of the best of the season! So original!

Last but not least is the second season of Mushishi. It took ARTLAND about 8 years to dive back into the manga, which I was a bit afraid that it would not be like the first season after such a long break. The OVA proved me wrong, and with the second season running off to a spectacular start I can see this being one of the best series to air this year. It is going to be difficult though with the amount of strong series airing later on this year in the summer and fall seasons. Zankyou no Terror, Space Dandy, Sailor Moon, PSYCHO-PASS 2nd season. Still Mushishi continues to be a strong series that tells strong individual stories. Having an astounding soundtrack, incredible voice talent, and subtle animation is why this series ranks in my Top 10 Best Anime Series.

Best episode yet! Terrifying! I haven’t been this scared since episode 19 of Shinsekai Yori! Absent from Zoku Shou until now was an episode that not only gave a frightening atmosphere to the story but that allowed Ginko to serve as a focal point of the story here! He wasn’t a sidelined story-teller and really pulled things through this episode! This show keeps getting better and better!

A Mushi that is born from the decay of living things! So scary! The amount of detail in coloring and animation was incredible! What’s even more engrossing in this was that the Mushi took the form of a mark of an eye on one’s hand. Pretty neat aspect to throw in here! If I recall this may be one of the few times Ginko was very frightened! The acting still maintained its high performance as its done previously, but now we get to see a gradual change in brought with the seiyuu talent. Ping Pong’s Tsukimoto voiced Tatsu here, and this guy is an incredible seiyu! The Fuki acted as a parasite into Tatsu which allowed him to attract and kill animals for his hunts. Only problem here was that the food was rotten and none of the villagers had any interest in buying from him and his brother Usuke. I really liked the constant use of crows in this episode! It foreshadowed bad omen and that the Fuki gave off a stink noticeable to Ginko that there really had been something off about Tatsu. Like the previous episode where Toki’s manipulation by the Mushi misled his senses, the Fuki created the illusion that Tatsu wasn’t smelling anything horrid. This episode gave me the creeps! This was the first episode where there was a time jump of about a month where things only got worse for Tatsu and Usuke. The gunshot had become a great transitional metaphor into Tatsu realizing he was losing himself, becoming one with the forest. A King of the forests! You could really see how Tatsu was getting greedy over hunting in the forest. I LOVED the scene towards the end there where crows go after his arm! The music in this episode was the best of the season so far and  I am not sure who the episode director was here, but whoever they were did an awesome job with this! However, this would have been really neat as an hour long OVA.