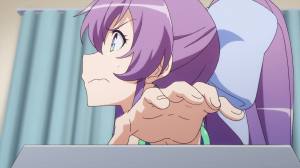 STAR DRIVER had a cameo this episode! Awesome! Not only does Nanana like playing videogames but she watches anime series too! Kiraboshi! Haha! This was a neat add in to the show here! I am enjoying Tensai and Juugo’s chemistry together. They seem to be quite the investigative pair. We also finally got a chance to see some more interaction between Juugo and Nanana. She is about the only character with not a lot of screen time in this series so far. Which is strange considering a large portion of the plot revolves around her treasures and the puzzles. I can see Nanana is growing on Juugo caring for him a lot more given that she continually gave him advice this time around instead of insulting him. This was about the only strong point of this episode. Everything else was just fluff with Yukihime’s relationship with Juugo.

One thing this series consistently does well in is its overall theme of being deceptive. We didn’t know Juugo was working for Matsuri for quite awhile and then he ends up betraying them here and there under the big reason that he wants to help Nanana find her killer.  Perhaps there is even more to that the series will throw at us later on. This show likes to hide a ton of background information from us and if the direction were more of a detective series rather than a light-hearted adventure series I would say this would have been a good route to go on. However, this show keeps building on this one fundamental piece to stray away from being boring. Sometimes it works sometimes it doesn’t.

After the wonderfully animated fight they had everything turned into complete cheese. Full of melodrama that probably wasn’t necessary for the sake of the story. The comedy in this can be at times witty, but for most of the time its delivery is poorly executed that strongly indicates bad writing and directing. Kanta Kamei directed Usagi Drop [Bunny Drop] which was a fantastic look into raising children and the effects death, love, friendship has on them. Great character study. Also following up with this Ryuugajou Nanana could be having these issues due to the light novel source material.

I will give this series props for its colorful animation and awesome fight scenes thanks to A-1 Pictures, but please Noitamina bring back the Josei genre. Honey and Clover, Nodame Cantabile, Paradise Kiss hell even Paradise Kiss pulled off better comedic scenes than this show. Those series knew how to create a balance between comedy and drama whereas Nanana throws it in to fill up time. I do like the whole idea behind the puzzles and different groups looking for treasure it’s everything else in between that makes this stale. Anime adaptations of light novels there have been tons of series in the past whether or not they are Noitamina or not that have been horrible and some that are done pretty well to say the least. Please don’t place this show in that ranking. I will admit though the first half of this episode was decently enjoyable.