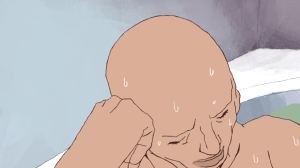 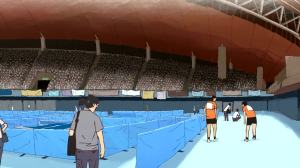 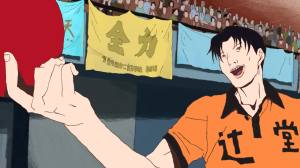 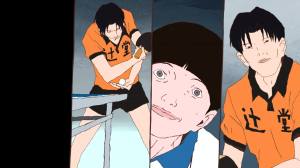 Haha! I absolutely love this series! Mushishi and this are the best of the season, this episode just once again topped all the previous episodes in this show! This was a fantastic episode! Where do I even begin with the amount of substance the writers threw in here! All that determination and drive we had with the emotions of the main cast from the previous episode all makes sense with the tournament here. Earlier on with the previous tournament we had a fresh set of emotions where every single player was nervous and itching to win.

Here, we got a feeling of acceptance. The level of maturity in Tsukimoto, Peco and Kong was astounding! Kong realized he wasn’t as good as he originally believed and perhaps it was foreshadow the he was really feeling homesick. Tsukimoto looked a bit stronger than he has been in previous episodes. Seriously the animators did a great job of conveying that. Throughout this episode they kept saying the the hero appears! and this was directly towards Tsukimoto. Ha! Not even close! Peco has grown so much in the year that he lost to Kong. He has a reason for playing the game! You can truly see it in his playing style here!

Shifting to another topic here. Shounen series should follow what Yuasa has done with this series. With a shounen series the characters battle and battle winning and losing, but there is no middle ground. No sort of logical format in how they can win to certain people and lose to others. For Ping Pong, the writers spent so much time developing these people only to fall and learn from their mistakes. Strong characters are what makes this series shine, and this episode was a testament to every trait that has been poured into them. Man, Yuasa would do wonders for series like BLEACH and One Piece. Not only that, but the episode director Mototaira Yasushi was able to pull from the disjointed segments in the previous episodes and move the plot forward. Especially with Peco. His training was shown last episode a bit all over the place, but here is the result of how it all paid off. I loved that scene with Obaba and Koizumi, we finally got to see how different their coaching styles were through their discussion on Peco and Tsukimoto! This was fantastic! This defines what a Noitamina series should be! Yasushi, I am surprised. I mean this guy directed episodes out of gem shows like Gin no Saji and Baby Steps, yet also took the helm on an episode of the horribly paced Kurozuka [granted the premise was incredibly solid, and awesome], Sword Art Online, and even Ixion Saga DT. Seriously that show was terrible. This director HAS potential he just needs a strong team of writers, producers, etc. to work with. Not to mention having this series be based off of an outstanding manga also helps.

Every single one of Kaio’s players were an imitation of each other! What happens to set the main cast aside right here from the rest of the bunch was the fact that they weren’t wearing the Poseidon shoes. I found it hilarious that Kazama who even advertised for the shoes chose not to wear them. I guess what Yurie said he gave some thought to. He was indeed playing for himself. Can’t wait to see his matches in the upcoming episodes! Peco and Kong’s match was amazing! Loved those closeup shots of Peco serving the ball! Such a fascinating turn to end the episode and we still have a few more episodes left! Great series so far!