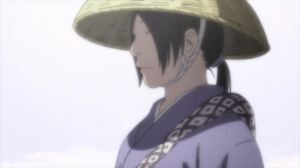 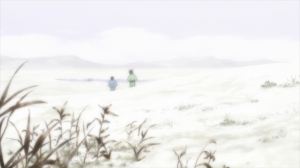 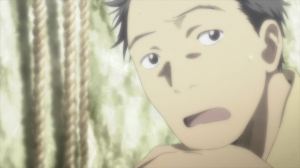 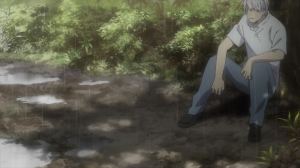 I am quite a bit late on this post I know. This series is quite spectacular. I had some inkling that this series having aired so much later than the previous season would cause major issues. There would be the case of the animation looking extensively different, the pacing wouldn’t be the same. The musical direction would either have been the same soundtrack used, or an entirely different tone. None of which would have worked for such a surreal series such as this.

Here we’ve got a story about a woman who controls rain by way of mushi. I had to view this episode at least twice to wrap my head around all the events that were taking place. A lot of the scenes throughout kept flashing back where Teru was just a little child. What is really neat about this series is that not all the characters are presented with similar afflictions caused by Mushi. The Mushi are only living out their own lives in any way that they can, whether it causes people joy for instance with the sake brewer in the first episode of this second season. These unique creatures can also cause pain and sadness and we’ve seen that quite a bit throughout Season 1 and Season 2 so far. The underlining connection between all of them is the revelation[s] that Mushi bring to people. Incredible writing by Urushibara.

Here, we had a young Teru experience an unnatural occurrence in that oasis that would lead up to being a vagabond. This show has tons of themes throughout yet I feel like this episode nailed it right on the head with this one. As I’ve said before this series is about human connection and the power that others [including the Mushi] can have over us. Water is essential to life and with that well-known fact in mind, the lack of it allowed for quite an emotional shift for all the villagers. They were angry that Teru’s ability to predict the rain would not come even in a span of a few days. Within 24 minutes the writers were able to convey these feelings with numerous villages by moving backwards in the time showing the viewer what Teru had experienced.

Granted the one piece I felt off about this episode was how they went about transitioning between these scenes where they had chosen to cut right into them. This is where it felt disjointed and the pacing was slightly lost. Unlike the episodes we’ve seen previously. However, the animation, the music, and the overall pacing landed out nicely. Positively speaking, I think what is an astonishing testament to Artland and Nagahama is how much they’ve kept the essence of Mushishi back after all these years of being absent. Amazing stuff!