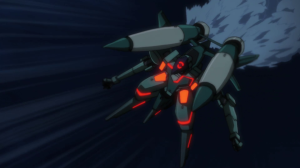 It is refreshing that we are getting to see different areas of Japan here. But come on! What happened to all that development with GLOBE and SALTY DOG in the earlier episodes. It is like the writers completely threw all that information out the window and have ignored it. We haven’t seen Nishikubo in a long while, even Akari’s mother for that matter. For the past 4 episodes we have had a string of formulaic planetary gear episodes. I wouldn’t say this episode was terrible but it wasn’t great either. Simply because we have seen this all to well before.

Once again another planetary gear is awakened and this time its Lin. Throughout these repetitive episodes, there has been a slight introduction of a few minor characters that perhaps might prove to be important later on. The one thing I will mention that this episode uniquely added were some of these people.

Here we had Mao who was the most interesting character in this episode. GLOBE and Salty Dog know about the designer children, but what if third-party organizations knew as well the power they hold. What would these other companies try to achieve? This episode posed this question greatly. Highly unexpected here. Mao works for a group or person known only as Robin, who funded the “install” project, and this was a nice touch to this episode. The plot here would have been a lot better off without another a new Planetary Gear added to the mix. So much repetition here. Hopefully though we will see more of Mao considering it was revealed in the last scene that she is watching over Setsuna. Another possibility that Setsuna is a designer child as well.