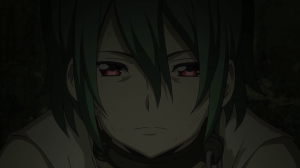 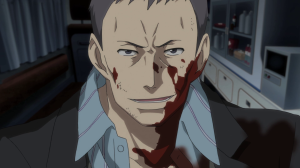 This was a very dark and dismal episode. The Yakuza are selling kids off to the highest bidder. Their treatment was pretty horrible as well. I felt so bad for the newly introduced Baku. He endured so much as a child to be put in a prison and sold off. Different for a designer child to be introduced this way! Great work in breaking the formula.

Baku is powerful person in this episode, he was saved by the daughter of the boss who is selling children. Kumiko saved him because I get the feeling she has fallen in love with him. Neat development here if that is the case. Her fiancee is the same man who got busted up by Amara and Moco 2 episodes ago! This series really is all about the minor characters! Even more intriguing! Baku even evaded Moco’s awakening kiss ability! So many surprises this episode! I am glad I didn’t completely rule out the idea of immortality being important in this series. Looks like I was right considering what happened with the casino guy/Kumiko’s fiancee. Looks like we will be seeing more of Baku next episode.