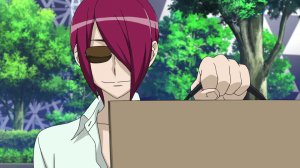 Finally getting to blogging Captain Earth. I am really behind on this series. I believe right now they have aired up to episode 13 so far. It looks like the 14th episode will have a new OP and ED to bring in its second half.

This was a lot better than the last episode. This was a surprise. I would have thought BONES would have continued the Zin arc with the half-hearted conclusion there. Here we are introduced to yet another Planetary Gear, seriously how many of these people are there? Ai is an idol, which if I recall we’ve seen her a few times in posters in some of the previous episodes. This was a nice change but for a series that uses songs for the sake of the story development its not a huge shock. Akari once again shined this episode, and proves to me once again why she is my favorite character in this show so far. She goes off on her own to buy computer parts, and ends up getting kidnapped.

Moco does her kiss to awaken Ai from her Planetary Gear slumber. These last couple of episodes have had a formula just like STAR DRIVER did. Learn something new the first 10 minutes or so, bring in a new character for the main cast to fend off, and throw in some new songs. Repeat it for awhile and its going to get boring. Here though we did have something different. Akari was forced to hack GLOBE’S systems affecting the Earth Engine Impactor, but I would not have imagined her to have such a strong personality like this. She was willing to destroy the entire planet if she wasn’t released. Ha! Great move Akari! This also taught us that the Planetary Gears need humans to evolve and live on longer. In the words of Akari, “don’t think you aliens can beat a mahou shojo!”