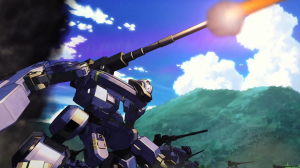 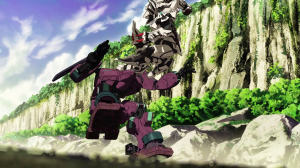 I know I am a bit behind on the previous season’s series but I figured might as well get some of these out as well. Welcome to the first post of the summer season!

So we’ve got a new mech anime series. XEBEC is animating it, these are the same guys who did Love Hina, Space Battleship Yamato 2199, and one of my favorite series of all time The Third.

Two countries [Arandas and Ingelmia] have been at war for quite some time. Tokimune, a young man part of the eight division of Arandas pilots a new robot “Argevollen”. I have is the writer of this Tatsuo Sato. He is all across the board when it comes to his production of an anime series. He’s done Mouretsu Pirates to the Ninja Scroll series. What he is famous for is his directorial debut of Martian Successor Nadesico. I just hope this guy can write something real serious here. The music I can already tell is going to be fantastic, it’s done by Kotaro Nakagawa. Now this is a composer you would definitely want for a series of this stature. GOSICK is one of my favorite period anime series and the music was truly telling of it. I have no doubt in my mind this guy can pull this off considering his compositions for Code Geass R1 and R2. Not to mention Gun X Sword. This sounds promising right? Well the big concerning issue here is Atsushi Ootsuki. Creator of To Love-Ru?! Come on! All this director has ever done even in episode production and as an original creator are moe fan service series! I will give this series the 3 episode review, and if it fails I will drop this show. The reason why I am rating this so highly is because I love mecha series and with an awesome writer, composer and animation team I cannot see why I would really enjoy this. This would have been much higher if it wasn’t for the director. They at least could have gotten someone more solid in the genre like Koichi Chigira.

The OP was featured at the ending credits and it was a nice rock song, that I hope the animation goes well with it.