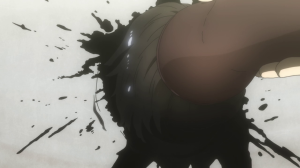 STORY: Seishu Hawada is a calligrapher who moves to the Goto Islands West of Kyushu. The story follows his interactions with the people that live there and his journey to become a better calligrapher than he ever had been before.T. This was so good! A bit about the production team behind this show before I dive into the first episode.

What was this?! The voice acting was done so well. Which makes me wonder if the production team recorded the voices before animating like how Natsuyuki Rendezvous was. This was so good! A bit about the people involved in this show before I dive into the first episode.

Kenji Kawai is finally back! This guy has done so much in terms of music that dates back from 1985! Maison Ikkoku, Ranma 1/2, Starship Operators those were just some classics he composed for. Some of his best works that I personally enjoyed were from Serei no Moribito, Higashi no Eden, oh and can’t forget about Fate/Stay Night and Fujin Monogatari. Great series right there. He really pulls a lot with the piano, and does a ton of calm background melodies that can add so much to a story.

The director Masaki Tachibana is extremely promising for a slice-of-life and comedy series here. He’s directed all across the board when it comes to churning out TV animations. Tokyo Magnitude 8.0 was a deep story about finding personal connections through tragedy and the overall struggle of survival. More so he drafted up Giovanni’s Island. I haven’t had a chance to check out this film yet, but cannot wait to see this when it arrives on Blu-ray in August. I’ve heard incredible reviews on this film.

Everything felt so right when I saw this first episode of Barakamon. The animation! Oh Kinema Citrus where was your budget from this earlier this year with Black Bullet? Not to mention previous seasons like Code Breaker. Those were some horribly animated shows as they went on. I will hand it to you Tokyo Magnitude was animated extremely well for when it had aired, but this episode! WOW! Move over PA Works you’ve got some competition this season. This had to have been the most fluid style we’ve had yet this season! Wow! Naru’s movements especially when she was swimming towards the end there were animated so well! The camera angles many a times were defining! The scene where Hawada punched the director was amazing! The face there reminded me of the comedic expressions from Higashi no Eden. Even down to the character designs were such a delight to see! So refreshing! I was afraid this was going to be way too annoying, but Naru seems to have a strong head on her shoulders! As Hawada said it best childhood is terrifying! Haha this was a fantastic first episode that portrayed Hawada’s introverted personality only for him to grow curiously out of his shell by the end of the episode!

Noitamina SHOULD HAVE PICKED THIS UP!

OP: Awesome! I couldn’t have asked for a better song to be played for this! Definitely will be checking out more of what the band Super Beaver has to offer! Animation flowed really well here too!

ED: Best ED of the season so far, that is if Zankyou no Terror doesn’t one up it. Very catchy and the animation reminded me so much of Ping Pong The Animation’s ED. Hmmm…Noisycell now that’s another gem of a band I’ve never heard of! Great work here!