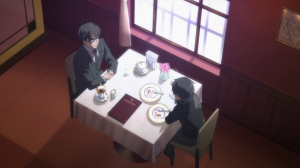 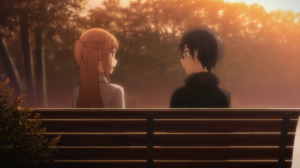 STORY: Picking up from Season 1 after the collapse of SAO and rescuing Asuna from ALO, Kirito jumps back into the world of MMO’s with Gun Gale Online. He tries to uncover the identity Death Gun and the mysterious deaths from the online game that link to the real world.

Having seen the first season it was pretty exciting to see this start off. It jumped right into the show without having to explain much of anything of the previous season. I was very wary when I heard this was starting up, because I figured we’d have some kind of recap episode. I was wrong.

We were introduced to the villain of the show so far. Death Gun. Not to mention a huge information dump about Gun Gale Online and its various features. The first part jumped right into the action whereas in the second half had Kirito spend most of his time in the restaurant learning so much about the deaths that were occurring in this pro-player online game. I am pleased it is the same director and music composer from the first season. Same seiyuu as before too! The animation hasn’t changed much at all, and this episode felt subtle in every way. Nothing felt too flashy, and there were no signs of repetition. Always good to see Asuna again as well. Great to have this series back.

The first season wasn’t in my Top 10 Best but it is highly entertaining nonetheless. If you end up watching this new series, I recommend seeing the first season. You’ll enjoy this season a whole lot more.

OP: Way too generic for an action/fantasy series like this. Animation was fairly detailed.