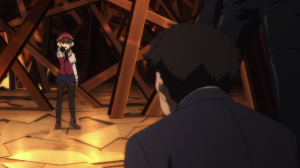 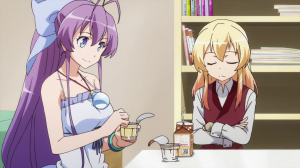 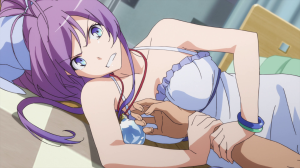 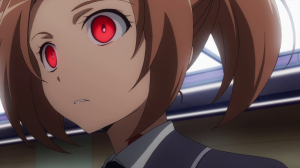 So I am finally finished up with watching this Noitamina series. Cannot wait to see what the broadcasting company has in store for Zankyou no Terror and Psycho-Pass season 1 re-edit this week. Nanana isn’t a series I would list in my Top 10 or best action and adventure series, but it correctly followed the light novel’s plot pretty well.

Ok, I can go with this. Thank goodness they didn’t rush this. Judging by how the light novel and this anime were progressing I could tell that there was the element of a harem genre in this as much as this is a mystery series. Only problem is the final 3 episodes turned this into an action/harem series with the puzzles as a backdrop for moving the story forward.

This episode greatly emphasized this fact that this is much less of a mystery series than it had been originally. The fight between Nanana and Juugo was a pretty big indicator of this too. We’ve left the show without a clue as to whom the killer is. On top of that Ikusaba’s absence was half-hearted in its conclusion, and the introduction of the Three Skulls gang and Yurika were just thrown in for the sake of following the light novel’s/manga’s timeline. I can see this show getting a second season that is if it sells well. Really open ended here even though poorly executed at times was a fun series to watch. The cliffhanger at the end there was also another reason why I see this series getting a faithful sequel sometime in the future on Noitamina.