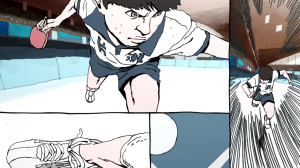 Noitamina you outdid yourselves in picking a series that screams risk-taking and being authentically artistic! This has been a fantastic series on so many levels! Ryuugajou Nanana no Maizoukin could learn so much from what this show has achieved in just 10 episodes! It is a shame this is only slated for 11 episodes as I would have loved to see more of these characters and the potential behind the plot!

So now we’ve got the match between Kazama and Peco. The entire episode was dedicated to this, and after watching this I can certainly see why! The art direction here was solid! So many frames with different styles and colors poured all over them! This gave the match the intensity it needed. The subtle music played off this sequence perfectly.

That scene where Kazama was slowly rolling the ball along his paddle was tough to watch. It was really tense there! As Peco was waiting last episode for Tsukimoto, it looks like Tsukimoto doesn’t even watch Peco as he knows he will win and have to face each other. Pretty strong intuition there Tsukimoto.

The long vertical panel scene was really different for this match. The inner monologue of Kazama definitely proved his pong skill. He knew everything about the game and would throw anything and everything at his opponent if he had to. Only here while he was returning to Peco he was reading his movements. I loved the intensity in Kazama’s voice here. A sign of hesitation? I would think so. Ha so Kazama looses it. Did not see that coming at all. It’s all about victory for Kazama because for him it’s a painful experience or burden as I mentioned in regards to the previous episode. That whole sequence makes those previous stall scenes a heck of a lot more powerful. I can really see this series one that I could re-watch.

I like how in this match we see the sides turning for Peco. Not only was Kazama losing it being controlled by his drive of victory but Peco was truly worried he would not win. They finally brought back Tsukimoto’s hum! So Peco created a hum too. Peco and Tsukimoto were a lot more alike than before and this whole scene enhanced that greatly. He was faster than before, and becoming a better player than Kazama in the match. Ha! I love this show! So we have Peco who is driven by his fun of the game and Kazama by his desire to win. Interesting to note that Kong was accepting everything at face value while watching the match, when just a few episodes ago he felt just as strongly as Kazama. The birds flying was a nice touch to the single cut face off between the two. That was really cool! Peco forgets about his injury and endures just to have the feeling of what it’s like to play pong for fun.

I’d have to admit it was hilarious seeing Kazama turn his monstrous driven victory into a game of fun as well. I also really like the fact that Kazama continues to just accepts things as they are. This proved how fun pong can be for these two players, and whom would be the winner here. Can’t wait to see what is left in the final episode in this! This has to be my favorite episode out of the series so far. Incredible writing, amazing animation that all came together so smoothly for one whole match! Yuasa you rock!