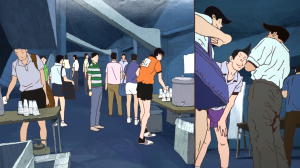 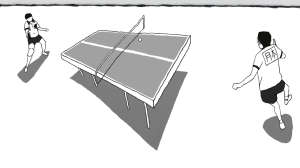 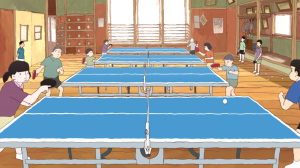 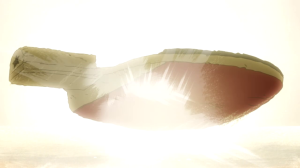 Not much to say just that I was in utter shock and awe over this ending. Noitamina sure picked a golden story to tell here. Everything to the beach guy accepting his love of pong once again, and Sakuma’s wife having another child, to Yurie continuing her success came together in the end. This was one hell of an ending! I was surprised how the episode did a flash forward in the middle of the match between Peco and Tsukimoto. Interesting transition but it worked out very well. Only Yuasa and his team could have pulled this off.

The use of technology in this series was so minuscule that the scenes that displayed this side of life was done really well. I like how series can pull in social media aspects of today and incorporate them into series that have been running in manga serializations since early 90’s. The manga was if I recall done in 1996 to 1997. Technology at that time wasn’t at all what it is today. So it was really cool to see the text messages displayed on the other side of the screen here. Gatchaman Crowds played with this topic as well, and did so very smoothly. With Ping Pong in this episode, you could see the responses by the people in the area that were shocked it was two players from the same school that got into the finals. Let alone end up playing each other, and Kaio the renowned school was out of it completely.

The match itself had to be the best animated sequence of the entire show! The black and white backdrop against the two of them depicted how much they were similar as people and pong players. The flashbacks throughout this entire episode were much needed to understand more of how Tsukimoto learned from Peco. No idea Peco trained Tsukimoto in pong and we actually got to see that animated here! Both of the players were heroes to each other wanting to raise their potential to be the best there is.

Everyone looked so much older! Tsukimoto ends up coaching the kids at Obaba’s place and ends up meeting with Kazama of all people. I would have thought for sure Peco would have been the one to show up. Kazama finally accepts where he went wrong with Yurie which still proves that he accepts everything as they are but now questions what he had done right and wrong. Is putting table tennis ahead of everything else the right answer? For some it seems Tsukimoto thinks so. Refreshing to see Kong redeem himself towards the end where he made it to the Olympics.

Peco worked hard throughout this entire episode to win against his hero despite his injured knee. They did not even show the rest of the match, and yet the framed picture of Tsukimoto, Peco, and Kazama illustrated so well that they ended up having a fun time achieving towards their own goals. Great imagery there! We even had a scene thrown that showed Obaba, Koizumi and the president of Poseidon when they were younger! I would really have loved to see that match against the coach and the president! Ha hilarious stuff right there! This is how to write an ending! I have been very impressed with the way this series has turned out!