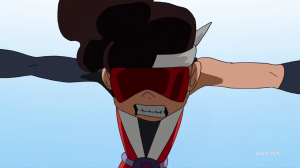 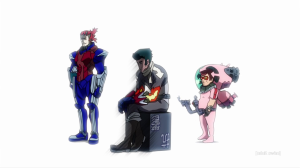 So I’ve got to say I am still quite surprised that Watanabe is working on two entirely unique anime series in one season. Space Dandy has a been a wild ride since it began its first half in January and with its return here I can see how well he can pull together talent from every side of producing anime to tell a story. Allowing so much creative inspiration from music artists to key animators can create a strong comedy series that doesn’t let up!

On the other series, Zankyou no Terror which begins its airing tomorrow it is going to be on the other end of the spectrum! We’ve got Space Dandy the comedy show that has surpassed every comedy series that the Winter 2014 season offered, and now this. A drama. I have been waiting for Watanabe to unveil something serious. I will be curious how well this show will pan out. A psychological thriller series that puts the story in Tokyo about a terrorist bombing ignited by two teenage boys. Not to mention the protagonists in the story will be the terrorists! Sounds crazy already! I’ve seen the two trailers that are out so far and this screams Noitamina and just goes to show Watanabe is one of the most talented directors in the entertainment industry.

I am really glad this series is back. I remembering reading an interview back in summer 2013 that Watanabe said they had so many alien and character designs that they could do well over 100 episodes. This episode just fueled that quote quite a bit. I can now see once again how and why this series caters to an american audience. After viewing every episode of this series so far in English first and then in Japanese its no wonder how much translation adversely effects the detail portion of an episode. There were so many simple minded jokes thrown in here, that even in the Japanese version a lot of the dialogue had been more subtly rather than being vigorous.

From seeing all of his animated works so far I can only guess that Watanabe learned from Cowboy Bebop’s Japanese airing. It had been a failure one in which that he needed to find a little bit more influence from the show’s background. Finding an american audience first and then to go on experimenting with it. Interesting to see how much this director has grown after that series.

14 episodes into this series and every person that has been shown on screen with lines has been original both in animation and personality. I would put this as the most bizarre episode of Space Dandy to date. Finally we’ve got some development in alternate universes! This was hinted at in the ending of the first half. Alongside the fact that characters were dying in episodes and coming back up in the next one! Each segment that showed parallel Dandy-like characters were directed by entirely different people, and this showed through quite a bit! This is one of the reasons why I enjoy watching anime so much! Being able to construct a story without any sort of guidelines to follow. Any animation whether its anime, CG or however to get the point across is so boundless! This episode displayed that extremely well!

Varied directors pulled in tons of parodies to other television shows and tropes! This was hilarious! There was the Michael Jackson/Goku Dandy, Space Inspector Dandy, the titan Dandy that eventually led to Emo Dandy. It wasn’t just Dandy who was parodied here. The rest of the crew followed with some nicely acted comedic moments. A grand way to bring back this series after a season break! I can also see how well the craziness continued throughout this episode. Kimiko Ueno wrote this. She wrote episodes 3, 4, and 7. All those episodes had so many unique ways in delivering its comedy. Not a single episode ended up being repetitive in which very many cases happens in the delivery of lines, scenes, and how people are portrayed in comedic anime shows.

As for the episode director Mukai did better work on the comedy here than he did on Level-E. I praise that series for the way it stuck its characters into the plot rather than around it. So many series suffer from that mindset of writing. This episode of Space Dandy managed to deliver a continuing parallel dimension story at the heart of all of it! This is while still keeping up with the classic humor this series had set for itself in the first thirteen episodes. Great work here!