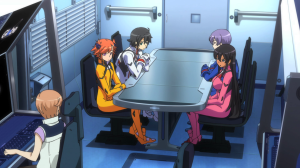 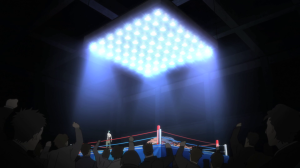 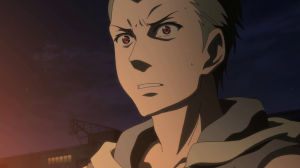 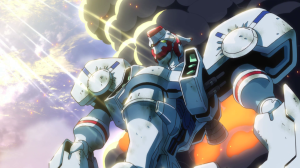 This show is a guilty pleasure of mine. I loved Star Driver and how much that show reminded me of Revolutionary Girl Utena. School kids with special abilities that pilot giant mechs. Adults who watch over the kids have a past quite similar to the present plot line. Music is power. I know it sounds overused and generic but I find this series really entertaining. We’ve had some formulaic episodes in the past with this show, but one thing has remained strong. The idea that the Planetary Gears want to consume Earth somehow. Not destroy it. We have yet to learn more about Daichi’s father even Daichi himself! So he became a captain, and Teppei now has a mech. We don’t know much about Hana yet either other than the fact she had hidden powers with Pitz. This episode continued from last time with Baku’s story.

Like i’ve mentioned this before a great aspect of this series is its side characters. Baku is powerful and strong but when it comes to emotions its his feelings that he represses. This guy had tons of development last episode and now this one. Here was where we finally got to see him be pushed over the edge. Never would I have imagined all those people that were still alive would disappear after his singularity would lose effect! Unlike the previous introductory Planetary Gear episodes this one’s timeline of what happened was very different. I would have thought for sure Bugbear wouldn’t be awakened until much later but here you can notice the Planetary Gears maintain their previous emotions and selves after they’ve awakened. Interesting. Part of the plot I hadn’t noticed before until now. Do I have to wonder what’s up with Puck? Haven’t seen much of him lately.