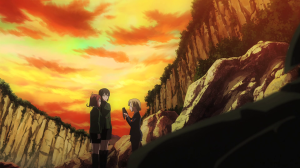 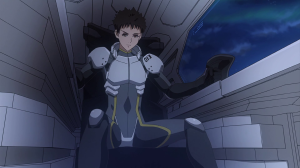 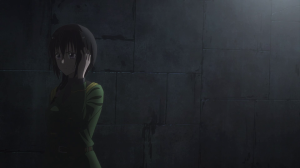 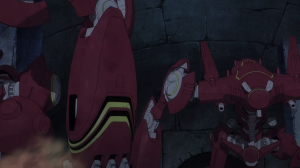 I like the fact that the mechs in this series are not flying like many series that have interwoven war into its plot. Two countries fighting for control, and both sides are even grounded in technology. But come on seriously? The show as far as I’ve noticed in the first two episodes focuses too much on how the characters are thinking. Tokimune has had zero development in his personality in the previous episode and now this one. Yeah he has a tough time killing and cannot control a mech very well but why deliver it in this way? At least in M3: Sono Kuroki Hagane Akashi has a legitimate reason for being there. He tested in to the program after which he was handpicked by higher-ups. This guy is a wimp. XEBEC could have done a much better job getting this message across rather than oh lets put a mysteriously powerful robot in the hands of someone who cannot even pilot it! This episode vaguely brought in Jessica to explain this really tough idea of “just think about moving and it will move”! Deus ex machina. I hate these plot devices. This is used in so many anime series and can effectively be done well but more often than not it’s bad just real bad.  Sorry to say this series did not even make it to episode 3. This was terrible!