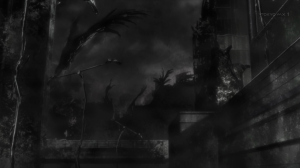 I have been wondering for quite some time why this show carries so much emotional baggage.  After watching this I think I know why.  These pilots have suffered a lot and it’s only normal to vent out their frustrations.  They saw their principal dead, they have to fight monsters that contain memories of dead people, and one of their pilots Emiru lost her life through the dark metal.  This does not even feel like a Sato series!  Really strange to see a director more well-known in the mahou shojo genre tackling a horror mecha series.

The Argent containing memories makes complete sense as to why Akashi has been having obscure yet frequent blackouts.  This- resulting in dream-like scenes of his brother.  Him being upset about everything that has happened thus far and this episode did a fine job at returning back to that theme.  Kasane looks like she bears more pain than any other person in this show.  She loved Aoshi and it looks to me like after seeing this episode that she holds a huge secret in her heart.  Curious as to what that is.  As for Heito, he is just a crazy mess of a human.  This guy seems more normal after having lost his partner than he had ever been before!  It’s interesting they chose Akashi and the Reaper to travel to the Lightless Realm with Heito and Sable.  I say this only because Heito is one of the pivotal characters of this show and he bears the weight of being murderer.