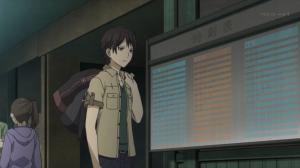 This show manages extremely well at following up right where the previous episode[s] left off. There is no recap and as a viewer sitting there picking up the pieces of what just happened.    There was so much going on in this one episode for Akashi, but it is strange how Minashi is the only one who has a consistent level of thinking out of all the pilots.  Last time the majority of them were hoping Heito would never come back- now that he is very much lost in the Lightless Realm they want him to return having Akashi and the Reaper rescue him.  That was an emotional turn that doesn’t make for good writing if I ever saw one. That was about the only flaw I noticed plot-wise in this episode.

Kasane was still grieving over the loss of her lover still!  Natsuiri sure is a bastard in this show; he may be realistic in his views considering the video he showed her, but it makes sense for the sake of his research on the Lightless Realm.  Here is where we finally see more of his intentions.  Villain of the show?  Might just be the case.  More than halfway through we learn Aoshi is still alive?! What the hell?  Being turned into dark metal only to be experimented on for the sake of developing a stronger machine.  That sure is a cruel way of saving human lives.  Even Emiru is alive.  Powerful realizations for Akashi here that he needs to find in his own way to accept!  Looks like Kasane’s secret all along was her knowledge of Aoshi still being alive encapsulated in the Argent.  Wow this episode was a lot better than I expected it to be.