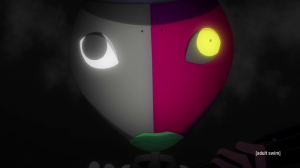 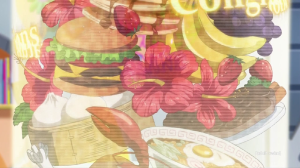 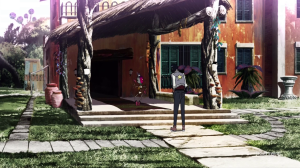 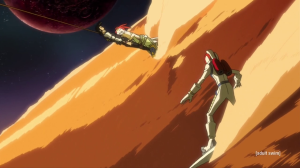 I was hoping that this would not happen- Watanabe is working on two series at the same time. Zankyou no Terror [Terror in Tokyo] and Space Dandy.  I can tell how much stronger the first half was than how much this second half is turning out.  Zankyou no Terror has been amazing and he’s directing and writing that show.  Here- Watanabe serves as General Director in which he oversees the entire production that the various episode directors, animators, screenplay writers, and other artists develop each episode.  He has free creative realm on both series yet here it’s open to the episode directors.  It is really neat for the anime industry to have a series like this that is so mixed in picking a crew to design an individual episode looked at by one of the best directors in the anime world.  In some cases though putting together a production team can completely change the original idea of an episode. Previous episode with the numerous Dandy’s and crew were so original and extremely funny but what kind of episode was this?  They tried to be serious here, and it just got very weird. A plus here was the animation was still fairly consistent.

Interesting choice to pair Toshiaki Kidokoro as episode director with Keiko Nobumoto. Kidokoro has been across the board when it comes to episode directing.  There are some bad series in his list of works. Ben-To and Hayate Combat Butler. These shows had more fan service than actual plot.  Amnesia was a train wreck from the get-go based on an otome visual novel series.  Where he did it right was with Knights of Sidonia and Samurai Flamenco’s episode 11.  As for the writer, Nobumoto helped with the screenplay alongside Satoshi Kon for Tokyo Godfathers! Such an amazing film!  Not to mention my favorite series Cowboy Bebop and she was the one whom originally created Wolf’s Rain.  The would have paid off much stronger I think if the production for these two roles had been switched.

This had been a serious episode following Ukuleleman’s obsession with Dandy that quickly escalated into a desire to capturing people’s smiles by turning them into statues.  I was pretty displeased by how the end came off here.  He gets lit on fire and dies and what about the other inhabitants of the planet?  I will say that the plot was very creative in that- Ukuleleman decides to find a Dandy from another time and steal his smile pulling him from the River of Time.  Very clever here in how they continue to use time as a theme just as the parallel dimensions are the overall theme of this series.  It was in its delivery that this episode was not as strong as it could have been.  The background designs were quite varied here and it would have been refreshing to see more.  It was nice to see that Dandy and his crew’s comedic routines didn’t bite the dust here.  I just hope that next episode is a lot better than this.  Cannot wait to see what Masaaki Yuasa has in store for a Space Dandy episode!