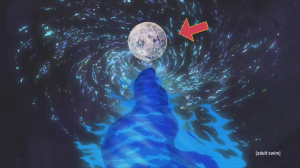 Ah yes! Yuasa Masaaki’s episode has finally aired! This was much better than Kidokoro’s episode last time! As soon as I heard back in April via his twitter feed that he would be directing an episode for Shinichiro Watanabe’s Space Dandy- I was overjoyed!

This happened to be a very strange episode: Dandy loses his head from a flashlight that teleports objects to another area in space, where he arrives on a planet with a talking carp.  Space Dandy does an astounding job at designing entirely different aliens for each episode and this story here was no different! Yuasa’s imagination was great for the plot that they decided on running with here!  Varied wide-angle still shots of Dandy and his crew, running down cliffs, falling transparent holes, flying a ship through a water-like stream.  Every scene was so imaginative!  Pushy Boyfriend ended up being a desolate wasteland while it’s orbiting planet Girlfriend looked like backgrounds out of the old science-fiction flick Metropolis.  This episode just proved even further how well Yuasa is at combining his art with strong characters and a creative plot to deliver a vastly different and obscure episode.  This episode highlights just why this guy is one of my favorite directors in the industry: He has created a unique artistic style that dismantles every anime technique out the window.  Kemenozume, Kaiba, Tatami Galaxy, and the more recent Ping-Pong The Animation. Each one of these series were strongly intriguing in how their plots moved along because of how un-stylized or rather out of the norm the animation was.

Having its share of laughs tampering with the flashlight: the plot here ended up in its later half quite dismal.  This paid off extremely well- the sun revolving closer and closer to both planets wiping out every living being.  THIS is how to transition between comedy and serious, unlike the previous story.  If I had one gripe it was that we did not get to see more of the lifestyle on Planet Girlfriend.  That would have been interesting to see explored.