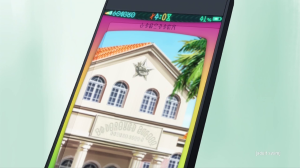 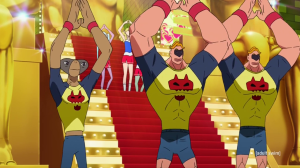 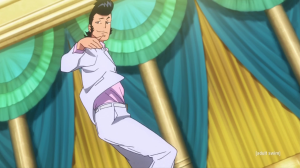 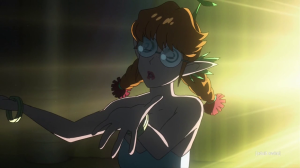 Chwitter! Hahaha! Best line in the show: When you get home you need to smack your parents! This had to be the best episode of the second half!  If there would be an episode to show a first time viewer of Space Dandy it would quite possibly be this one!  Out of the entire season I’d put this episode second best right below Episode 5.

The story was fairly straightforward: Dandy decides to become a transfer student in order to find and capture a rare alien plus score him some high-school chicks.  Not only was this episode extremely funny but it delivered an entire parody of the modern day american high-school system.  Managing to make absolute fun of shows like Glee and the film series High School Musical. Space Dandy was at a comical peak with this episode!  Which blasted off to a great start and ended on a high note!

There were so many cameos in this!  The slime from Ghostbusters, the fly machine in reference to the 1986 film, the Iron Man-like security guard, the Hulk turning Queen Bee goons. Was it just me or did Queen Bee and her sidekicks remind me of Satsuki Kiryuin and her minions from Kill La Kill?  This episode also proved once again how much of a pervert our main character really is- especially when he attempted asking girls out to prom.  The musical numbers that showed up here paid tributes to the film Grease and all those Disney tv series.  Was that training session between Dandy and Freckles homage to Rocky?  All the songs were original and hilarious!  Hope to see another Dandy episode break the mold just like this!  Great work here! I would also like to mention this episode was so humorous in english than it was in Japanese.  The Japanese cast adds in the comedy so subtle whereas the English adds more exuberant dialogue. The english dub cast did an incredible job at re-creating the lyrics for these insert songs! Just as good as their Japanese counterpart if not better!  That booty song! Haha! Great stuff!  The animation was top notch here too! That final song scene featuring Freckles has to be one of the highest quality scenes that this series has done so far!  So awesome!