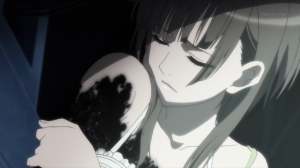 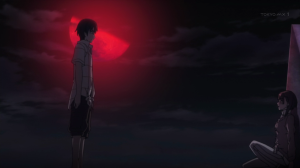 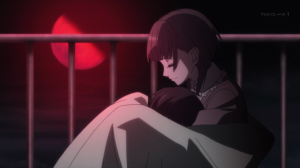 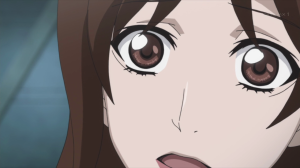 I was highly disappointed with the episode. I will start off with a few good things it had going for it.  Sasame became the love interest in the show for Akashi.  Such a moving scene between the two of them up on the roof embracing each other yet it was so melodramatic!  Minashi’s character has been so left in the dark until now.  That past scene with Sasame and Minashi was pivotal in showing that not all these pilots are the same, they have there own desires and regrets which ultimately hinted at Minashi becoming a villain.  Here is where it went wrong. That was out of left field. This show went from a mecha series, killing minor and major people off to adding a bit of romance.  As cheesy as it was done here I cannot see how this series is going to pull off having a 2-cour instead of 1.  Just hope M3 doesn’t fall flat on its face when its all said and done because this episode as interesting as the Minashi scenes were the amount of melodrama is fueled more than an actual solid plot.  The very beginning was really evil of Natsuiri to reveal the dark metal on Sasame in front of the rest of the pilots. Can’t say I liked how Akashi handled his emotions after that scene.  Way too dramatic.  Come on Sato can your characters in this show be a bit more understated? Strange Dawn, Aria and Kaleido Star were great examples of strong characters. The main cast is crying in just about every episode just as much as Gundam 00 had.  The writers should refrain from doing this.