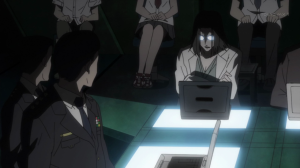 As we are entering the second half of this series we get a new opening and ending!  Wow this OP was tons better than the RE:REMEMBER May’n OP!  The animation was top notch and the song by Maaya Sakamoto was fantastic! THIS IS HOW THE ENTIRE SHOW SHOULD LOOK! Can’t wait to hear the rest of this!

So we get a nice look at the government officials backing the IX department.  Realistic repercussions for the Lightless Realm expanding and Natsuiri was able to turn this problem into his favor.  Spirited Away Children was an interesting concept put into the heads of the pilots this time.  Explains why they would have remembered parts of their childhood of being together.

Mahmu linking with Emiru, never would I have thought this possible but here it worked out very well.  With Heito in intensive care and Sable without a pilot Mahmu was the only logical choice here.  They wrote in Mahmu and Emiru’s friendship so well here.  We’ve got two shy girls, one afraid of being accepted by others and the other afraid to accept others into her own life.  Mahmu’s feelings grew so much here!  Great to see a big development from her finally!  The animation was also really awesome here too- the scene with a dark metal version of Emiru desperate for affection from Mahmu.

The ending was much better in the first cour. Usually, I enjoy the songs that Nano provides for the most part but this song doesn’t fit the style that M3 has presented itself to us so far.  La La Larks developed stronger instrumentals and vocals landed heavily for  what this series is about.