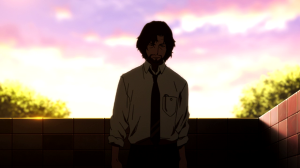 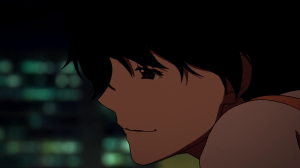 It is going to be tough at the end of this year- rating my Top 10 Anime Series of 2014.  The only series that won’t make this count is anything that is 2-cour for the Fall season.  The requirements for this is that- series need to have finished airing or entered its 2nd half for 2014.  There were a ton of great series that aired this year so far.  Kill La Kill was GAINAX cream of the crop here, and quite possibly one of the best works to date in their repertoire.  It took the ideas of Revolutionary Girl Utena glossed them over them with an intensely sexualized element to clothing and added in high-schoolers with special abilities.  Mushishi was an amazing collection of stories that explored human connections at its core with an entirely different cast and setting each week!  Ping Pong the Animation shined with its characters.  Yuasa’s obscure technique turned what would be a regular series about pong into a well-acted and provocative look at life inside and outside the game.  Space Dandy the other Shinichiro Watanabe series gave life to classic science fiction stories with a string of comedic genius qualities in its people, alien designs, one-liners, and all around artsy style.  Giving it a bit of an edge with different directors each episode.  Should I even bring up Samurai Flamenco?  That series excelled at genre-shfiting which resulted in an unfinished ending and overall interesting yet very peculiar look at superheroes.  Now with Zankyou no Terror this series will be one that will be talked about for years to come.

Another amazing episode!  Watanabe and Kanno are doing wonders for Noitamina.  This broadcasting company has been known for varied out of the norm works.  We’ve had college romance, a series about fashion and classical music, a medicine seller whom rids of evil spirits with pastel-colored animation, an 8.0 earthquake show, a phone with 8.2 billion yen on it, so many varied series that set themselves apart by handling different subjects from what many other companies would be afraid of doing.  Taking risks and I for one am all for seeing anime venture right into this kind of market.  Zankyou no Terror is doing just that.

This show each week has continued on being very engaging with its characters, music, animation, and thrilling plot.  Shibazaki figured out the last bomb and finally- right here he became the crucial element at solving another riddle?  Awesome.    Atsumi Tanezaki did phenomenal work on portraying Lisa in this episode!  The scene where she yelled at Twelve dynamically changed her from what she once was- soft spoken in all the previous episodes here we got a taste of how she is breaking down.  She’s been worrying about life so much she forgot how to have fun and laugh.  So far the star of the show has got to be Soma Saito.  He’s so versatile in his voice acting as Twelve.  We saw a lot of that here.  A well-rounded cast allows for the plot to be much more compelling- exhilarating to see this happen with an anime series here.  Its great to see Twelve display very real emotions when it comes to her.  She ran away from home, nowhere to go, and a terrorist is choosing to accept her.  Is this foreshadow for his death later on?  Hmmmm I wonder about this.

When I watch a show like this and compare it with a lot of the summer season shows like Sword Art Online and even Aldnoah Zero, I can see how much they don’t even come close in establishing its characters with such fortitude like this one does. These summer titles sometimes contain a lot of unnecessary angst where here is where we’ve got people with varied emotions all on the same playing field. Following the same rules, just the people are with real jobs or lifestyles that put them entirely in different situations throughout the main terrorist plot.  I guess what I’m trying to say here is- every character in this show has a specific job in order for the whole to be carried out- an example are the investigative scenes in this series.  It is like watching an anime film each week!  Everything comes together very nicely!  Don’t even want to know what sort of budget they had for this it has to be huge. Haha!  Loved that motorcycle scene at the end there- such fluid animation when the bike arrived!  This was just so breathtaking to watch!  As for what happened here its interesting to see how cold Nine is.  He must have had a much wider traumatic experience at that child facility than Twelve did if that is what happened.  He’s all about the plan they’ve set into motion caring nothing for the immediate well-being of Lisa only I can imagine that to come crashing down later on.  Since episode 2 when the writers brought up Tor and the thermite reaction analysis during the meeting I can tell a lot of research has been put into this.  Here was where we had references to current events with Bitcoin, and the discussion of credit card theft.  This show capitalizes on todays themes- throwing them into a fictional version of Japan and it really has paid off with these first four episodes!  Great execution here! The fact that bomb once again wasn’t even a bomb and more of an information leakage of the police files on VON was incredibly genius! They act look and act like terrorists but deep down it’s more than just violence and explosions but accepting truth. Very creative!

No wonder I recognized the ending animation! It’s by Takeshi Koike- same animator for the opening to Samurai Champloo and animation/director of Redline.  Also, the animator of Fujiko Mine which was an awesome Lupin series if you haven’t checked it out yet.  I love this guys style and it works  well here. The song IS featuring POP ETC was a nice touch at the end.