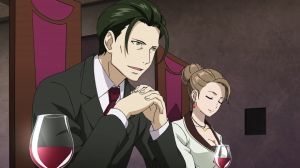 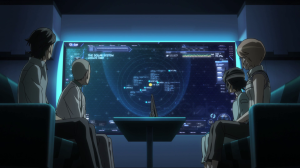 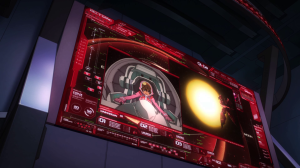 Puck looks like he will be the final villain of this series- at least that is what I got out of this episode.  The fact of the matter is that it is strongly indicated here as he’s been able to trick even Amara and Moco with Kube’s strange behavior.  So the Planetary Gears don’t know he’s taken over his body- interesting development.  Now that the goal for them since the beginning is to expand their lifespan by transferring libidos into other humans it’s ironic actually Puck achieved this in a different manner.  Even more so- that there is a strong collation between the Planetary Gears libidos and Puck/Kube’s interest in Hitomi.  Really like how they developed that there.  However I do find it strange that Amara hasn’t caught onto this.

We haven’t had an episode that was well-rounded for awhile quite like this one.  So the Planetary Gears were reflecting on their previous lives and if all was worth it as were the Midsummer’s Knights.  Good to see a correlation in the two factions- one that could possibly end up having an alliance against Puck?  I wonder if it will follow this kind of mold in the future episodes.

So Hana in the end gets to pilot a new robot the Flare Engine.  This is a big reason why I like this series and how it differs from STAR DRIVER.  Nishikubo, Teppei and it seems Akari already knew about the Flare and Hana’s piloting abilities.  When Teppei acknowledge to Daichi that Hana had a higher score than him this showed how much depth the entire cast has, and how much they’ve grown in this show.  It’s about time someone in GLOBE’s department theorizes Hana’s precognition might just be her own singularity and not Pitz.  This was a very entertaining episode!  Refeshing to notice how much this show knows when its able to distinguish from being a repetitive episode or advance into something new.  The fight in space was with someone other than Moco and Amara like we’ve seen  Did I even mention before how much I like the animation that goes with the Supercell song in the ending?  It’s full of wonderful imagery that depicts the overall theme of the series- responsibility.