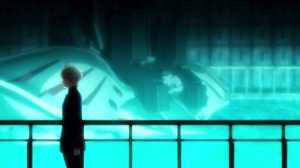 Awesome episode yet again!  I’ve seen series that run back and forth quite often to grab the viewer’s attention in understanding both sides- finally in episode that gets it right!  The pacing throughout wasn’t too slow nor was it too fast either!  Enough screen-time for the Vers Empire and the humans.

The perspective this time revolved around Slaine and how he is going to reveal the truth to the emperor.  It’s not big surprise that there are going to be more traitors among the Vers Empire just to push a war against the human race- here is where it was executed perfectly.  Another Kataphrakt down and the Darzana’s more and more curious about Inaho’s background.  Can’t wait to see what the writers have in store for that guy.

Slaine’s an interesting character as he’s got this redemption agenda for the Princess- I can see him joining Inaho and the others much later on when he is reunited with her.  Shocking that there weren’t as many casualties in this episode as the previous ones- considering how risky Inaho’s plan was aboard the ship.  Finally a series that uses a realistic approach at handling mecha consistently!  Setting aside that Inaho has been very calm about everything that’s been going down- here is where they had him use his intellect to find a way to lower the Kataphrakt into the water disabling its shields by using explosives packed into the armor of his own Kataphrakt.  Genius!  Solid animation throughout that entire scene too!

A-1 Pictures has done a fantastic job with all of the animation here including those CG moments!  I’m surprised by this a lot considering how much they are churning out on three other series not including this one!  SAO II, Persona 4 the Golden and Kuroshitsuji Book of Circus.  Way to go you guys!  Keep it up!  The soundtrack is still pretty strong too, I noticed a few new tracks in this episode.

I want to point out the director here for keeping up the incredible pacing of this show- Ei Aoki you went from Hourou Musuko a drama and romance series about cross-dressing school kids  to the popular action and fantasy series Fate/Zero to this?!  Now that’s a way to branch out and evolve directing skills that’s for sure.