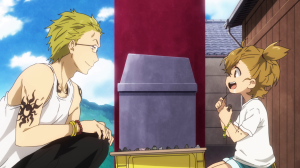 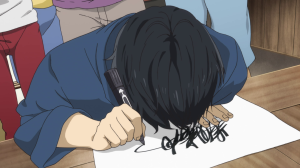 Kawafuji is one of the best additions to this show!  Nice to have a level-headed thinker among all the kids and crazy adults.  The voice of Space Dandy!  He finally shows up in the village and he’s great! Seishu is all over the place this episode- a whirlwind of emotions.  Throughout the series so far he’s been teased by Naru and the others even here we see the championship calligraphy winner Kanzaki harass him over his ability to write.   Simply amazing how much the town’s people affect outsiders!

Why did Seishu have such up and down moments this episode?  The performance looked a little off.  Especially that breakdown scene where he remembered and even muttered a few lines the curator he punched before.  That entire segment was weird.

We are getting into the heart of the story, now that Miwa and Kido understand how Seishu felt towards losing.  It was funny how much they perceived him at first feeling all down, and personally I think that’s how Seishu would have been at the beginning of this series.  Kawafuji was right to send him out on this island as we are starting to see him interact more and more.  Good to see some backstory between Kawafuji and Seishu in middle school- greatly illustrates Seishu’s personality very well.  The end scenes after the credits are just the best!  Poor Tamako and her yaoi fears. Haha that was hilarious!