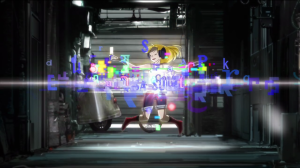 Short Peace is a fantastic idea!  I finally got the chance to check this out and I am sure glad I did!  If anyone remembers the anthology of short animated films Genius Party and Genius Party Beyond then you will know that this is very similar.  I cannot stress enough how good Baby Blue is from that collection.  Short Peace takes four directors each with their own styles in telling a story.  I’ve been wanting to talk about OVAs [original video animations] and films for quite some time- what better way to kick this off with Short Peace! The animation in the beginning segment that lasts about 4 minutes or so was stunningly beautiful-especially the transformation scene of Mai!  Grand introduction to the idea that when we close our eyes we can open ourselves up to a world beyond our imaginations! 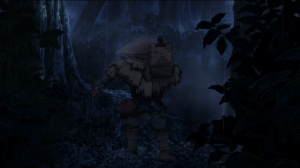 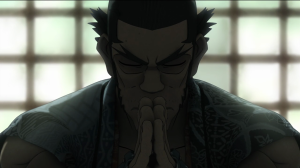 The first story is about a traveler looking for shelter from the rain.  Coming across a shrine he encounters a collection of household objects inhabited by spirits.  This was one of the best shorts I’ve seen in a long while!  Same vein of Mushishi and Mononoke given that this deals with the supernatural and life.  As we can see the man is a traveling artisan.  A box of tools and supplements for the umbrellas and kimonos is right out of Ginko’s medicinal box!  The sound effects played a huge role in this as there was not a single piece of music to accompany the story!  Loved the part where the man  was tinkering with the umbrellas adding sounds to give that tatami room such life!  The kimono scenes were straight out of a picture book!  Everything was animated in such detail!  I had a feeling this was going to be good considering how well he did on the Freedom OVA’s.   People living on Mars and suddenly kids finding out everything they had been told was a lie- Earth wasn’t destroyed.  Fantastic sci-fi OVA collection there!  Morita’s work on Possessions is a big reflection on how good the direction is in Tokyo Ghoul this season.  As alright as the manga is the anime has ended up being a solid series so far.  Probably wondering why I haven’t started covering that series.  Hopefully I will get to it soon.

Possessions here had such strong animation, the dialogue was real, the movements were life-like, and the CG was a lot like Knights of Sidonia.  However out of the two there was a lot more emotion captured in this than a single episode of Sidonia! 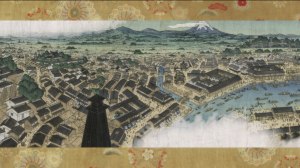 I like the story of Possessions better than this one and I think its because of how simple it was.  There was quite a bit going on here and I feel like this would have been better as a longer OVA.  The delivery was strong in this short feature. This guy sure knows how to animate but he really is good at directing.  Most known for creating the Akira manga and directing the feature film- Otomo is also known for his sci-fi punk anime film Steamboy and the live-action film of Mushishi. Any fans of that series if you haven’t checked out the film version it’s very good, not as solid as the anime series but still quite incredible!  Here we’ve got a story of love and honor in ancient Japan. The side-scrolling effect was very unique- it somehow gave the authenticity of how the times were back then and it executed it very well!  It did breakaway from that a few times where close still shots were shown, this took away from the overall classical tale it was trying to tell.  Aside from that it ended up being a good story about a young woman in love with the boy from her childhood and the trouble his family caused him which led to the fire engulfing the city. 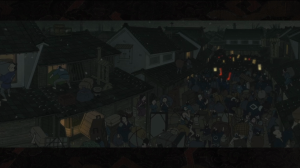 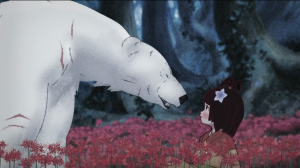 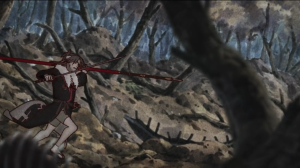 We went from a light-hearted mystical tale to a truthful view on feudal Japan to a bear fighting to the death against a red demon.  It was pretty disgusting too.  A woman was captured by the demon and was giving birth to them.  Oh and there was a UFO that somehow crash lands there.  Strange.  Hands down this was really hard to watch.  As gory as the fight scenes were the animation was so fluid!  Ando’s done some pretty crazy works but the only thing that comes close to something like this that he’s done is Norageki!.  It’s too bad we won’t get to see more of the samurai as he was about the only redeeming aspect of this episode.

Short Feature 4: A Farewell to Arms

Katsuhiro Otomo originally wrote this.  It’s got his animation all over it!  The post-apocalyptic setting, this can be an intriguing place to use.  Here we’ve got men in power suits fighting off automatic tanks.  Not very many anime place its world in a post-apocalyptic one.  Steins;Gate was fantastic at this as it used time travel at its core and placed the empty city around it.  No. 6, The Third, and Trigun are just to name a few.  The animation in this episode ended up being the best short film out of all of Short Peace.  It was also the only one to fully complete a story- one that’s premise solely based on disarming giant tanks.  Sounds simple enough and for a longer time length it paid off here.  The beginning gave us a nice look at how each man was different- reflecting on the good old days of 30 years ago.  If this wasn’t a big indicator for death flags I don’t know what is!  At one point I noticed how they weren’t just trying to disarm the thing but protecting each other as the GUNK wiped them out.

I’d have to say I really enjoyed this anthology of short films, aside from the gruesome Gambo.  I will be curious to see if there where be any other short feature-length films like this one and the Genius Party collections sometime in the future.