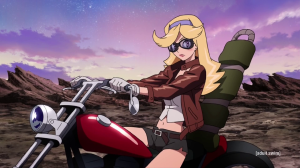 Is this place haunted or do you have a laugh track with low standards? Love is not something you grab with your tractor beam. Haha oh my goodness the one-liners in this series is fantastic!  I love this show!  I don’t believe we’ve had an episode that featured Honey and Scarlett as prevalently as this one did.  Episode 17 was a take on comedy musicals where Episode 18 was an obscure adventure into fishing- now we’ve got one that’s theme is about love.  About every single person in this was infatuated with the idea of it.  Dandy, Scarlett, Gentle.  However, Honey stole the show here!

Just in time to have an episode focus solely on its side cast- one that was very funny!  The laugh track on here- one that inserts itself as part of the story was very clever.  The black and white animation from Episode 11 was done the same way.  An alien did it- and here we had it again and it was quite humorous.  Keiko Nobumoto screenwriter of Cowboy Bebop wrote this, I can see the comedic influence of that series and Champloo illustrated here.  Would also like to point out this was the same guy who wrote and animated episode 8.  I can clearly see some tie-ins to that episode here.

So Honey gets captured Dr. Gel and V mask themselves to get this done.  Refreshing to see them outside of the ship! Gentle is an intelligent Cloudian as we learn here that he collects information from a lifetime of traveling.  An insightful episode on Honey- If I recall a there has been some significant changes concerning the dialogue in the Japanese and English language tracks.  In the English version towards the beginning of the series she’s portrayed as dense- in the Japanese counterpart she has a few lines that are pretty witty.  Funimation did a nice job of tweaking her lines to better the story.  The Japanese version omitted Dandy’s laugh track line and added in something so understated.  It is nice to watch a series and see how these two languages ultimately affect the plot aspect of a single episode!

Honey has some family and we learn of her real name was just the push that we needed to see to further develop her in future episodes.  Great episode!