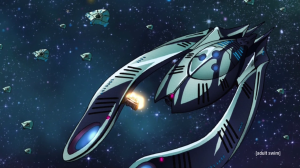 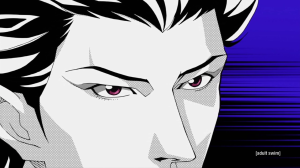 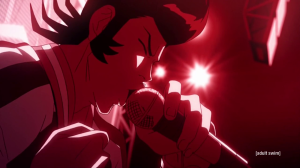 One of my favorite directors in the business- Sayo Yamamoto gives another shot at a Space Dandy episode!  I really enjoyed her work on Lupin the Third: Fujiko Mine and her directorial debut of Michiko e Hatchin is one of the best anime series I’ve ever seen.  She’s creating her own diverse style in the anime world and it has paid off! With another Dandy story under her belt the ramen took the sidelines and it was all music here!  What was with the production values in this, there were tons of varied shots of the band, loved the graphic comic sketches of Dandy and Johnny with overlay of Kanji, so many of the scenes flowed smoothly!  The fan-service moments at the diner with Honey were drawn extremely well.  Considering how there were two animators [Kazumi Inadome, and Yoshiyuki Ito] you can just tell the amount of creativity they put towards this single episode!   Also do want to point out how well-designed the aliens this time around looked not to mention the level of detail on the Jaicro ship in the beginning looked awesome!

I enjoy seeing this series every week- with how many references there are to pop culture, other anime series, etc.  This is a show that remains so refreshing!  I may have mentioned this before but I so very much enjoy episodic series.  Mushishi, the individual episodes of Ghost in the Shell, Samurai Champloo, and even Cowboy Bebop were highly engaging- here is where we’ve got a wonderful view of the living the rock and roll life.

Space Dandy’s second half has jumped even further into strengthening its characters.  Last time we had a look at Honey and Scarlett a bit more- an aspect the first season barely even touched on.  I do hope this series doesn’t stop at the 2-cour mark as the people in this show are just getting the attention they need but on a much larger scale.

Creating a solid plot is also what this series has marked itself well with especially in the second half.  In the previous episode- we learn that Honey a half-cloudian exemplifies her intelligence and gives us that “ah-ha” moment in understanding her character a bit more.  Just goes to show how entertaining it will be in re-watching the first half when we have this knowledge.  Scarlett’s harsh personality ended up being greatly reflected on the idea of love in the previous episode.  And now we’ve got a rock episode that brought together the leader of the Jaicro Empire and a reckless alien hunter Dandy.  The necklace that Dandy’s always seen wearing is explained- it’s in these small specifics that factor into an episodic series to deliver a wider story.

This episode was no different in that it is entirely what you would expect of two people starting a band- at a bar. Johnny is a fantastic character that bounces off so well against Dandy.   The banter between the two of them was genuine- pennant or sticker? Haha I really hope to see more of Johnny in the future!

Another episode about music- the composer which interestingly enough Yoko Kanno helped out with for this episode did so well at creating a rock atmosphere akin to 80’s music. I’ve said before how great Space Dandy is at delivering one-liners and yet this one episode managed to up the ante yet again!  The Galaga reference, Johnny being from Brittannia and voiced by Johhny Young Bosch same voice as Lelouch from Code Geass ended up being hilarious! Since the very beginning it’s clearly seen that Watanabe meant for this series to cater to an American audience. It has a ton of slapstick elements that are otherwise not very prevalent in tradition comedy anime series. I say this only because of how well the english dubbing for this series has delivered with such flair.   “Lonely Nights” the song featured by the fictional band Dropkix in this episode was done so well in both English and Japanese.  Also, was this song about Honey?  When Dandy sang it he was singing to Lady which if we know from the previous episode is her real name.  I love how this series continues tying in threads to the plot!

Have to hand it to Junichi Sawabe and Ian Sinclair they’ve done a wonderful job a portraying Dandy with different cultural comedic moments!  Interesting to see two entirely different anime series accommodate Eastern cultures in one and another series contain a Western style.  Watanabe’s other work Zankyou no Terror strictly indulges in a concrete continuous drama filled with Japanese design. The setting is in japan and it even takes a few riddles about Oedipus in manga form and expounds on it! With a show like Space Dandy it is able to combine a solid over-arching story with highly energetic comedy giving us a hilariously complete look at space life.  The hard rock elements in this episode emphasizes that theme greatly!