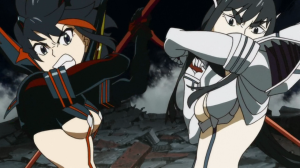 I am so glad to be finishing up this series, it’s about time.  Like I said before I’ve had these posts sitting in my drafts for quite some time.  Haven’t started my final review of this series but I should hopefully have it out sometime today or tomorrow.

I know right now that I like Gurren Lagann better than this show due to its plot, but some of the people in this anime are a lot stronger than quite a few of the cast in Gurren.  Especially Mako.

We are at the finale of this series one that I’ve got to say had a rather satisfying conclusion.  It wasn’t the best out of the Winter 2014 Season but nonetheless it was still pretty damn fun.  Ragyo really is a terrible mother- she’s manipulated her family to the height of destroying her husband and abandoning her children.  She even tried to kill one of her own- downright crazy!  Here though I’d like to point out how she follows the generic anime villain- absolute power over the covers to become a god and control the world even the universe.  Doesn’t this sound like every other evil in action anime series?    How typical to use a hegemonic theme in a show so brash as this but a good point is how its overshadowed for the most part by its focal point.  Clothing.

If it wasn’t for Trigger’s animation style, Mako’s comedic scenes, and just about every person in the show having so much sometimes unexplained energy this show would have been so dull.  So Ryuko battles Ragyo in space- silly but somehow it worked.  It made since considering how she covered the world in darkness with her powers and still wanted more.  I don’t think I liked the decision the writers took on handling this side of the plot however the conclusion was somewhat gratifying.

This wasn’t my favorite episode but it sure did end on a high note and I have to admit I’ve enjoyed the art style very much.  Also want to add that this show will be receiving an OVA in its final blu-ray release- have to wonder how the writers will be able to add even more seeing how they ended things here.