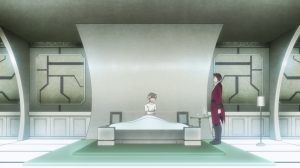 This was really solid writing right here! Fantastic episode!  Not a single bit of action this time aside from the Humeray flashback sequence, and here they were able to achieve tons of development in its characters!  The simulator ended up being a fairly straight-forward way of presenting Rayet’s hatred for the Martians- and that was just the tip of the iceberg here! This is a show that capitalizes on it’s people being so focused driven by their own motivations to further the story.

Saazbaum’s big reveal to Slaine happened in the first few minutes before the opening sequence?!  Incredible.  I would have thought the creators here would have left that one aside for awhile, but nope not at all!  Inko even receives a bit of the spotlight as that part where she gets flustered was quite humorous and an even stronger look at some of the other school kids in this show.  As little comedy scenes as there are in this show it was refreshing to see considering how deep the story has been especially for Marito.  Poor guy has suffered through the loss of his best friend from 15 years ago, and in that segment with the doctor’s VR test only amplified his sadness that much more- the truth of the matter that he literally killed Humeray.  Powerful stuff right here!

Aldnoah knows exactly how to create drama- killing off Okisuke, Trillham eliminating Rayet’s father, the Vers Count last time and once again this episode proved that in a very big way with that cliffhanger ending!  Knowing how Gen Urobuchi writes his characters this could go either way.