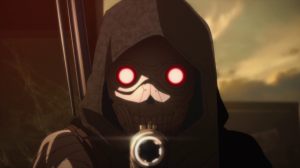 Sword Art what are you doing, I don’t remember the first season being this horrible!  This plot has been dragging on for far too long!  Last time we actually had some interesting development that pushes the story just a bit further but why is the pacing so slow?  If I recall SAO season 1 in the beginning did a ton of world-building– we’re at the ninth episode and NOW we’re shown more of the virtual GGO game.   It’s about time for this to happen but Sinon’s emotional outbursts were getting in the way of the plot.  I usually like Miyuki Sawashiro [voice of Sinon] but her acting here is not very good.

The scene where the girls of SAO were talking about Death Gun and how they may have known him in the Laughing Coffin arc just illustrates yet again how much this second season likes to repeat what it’s already shown to the viewer.  Hate it when shows do this.

Sinon getting stunned by Death Gun and is pinned down about to be killed- at least the ending provided some intrigue.  Yuki Kaijura, the composer of this anime is very much like Hiroyuki Sawano [Aldnoah.Zero’s music composer] in that all the songs sound way too similar.  Not much creativity here- but I will say she sure knows how to be dark with her soundtracks and that scene with the killer’s face from Sinon’s past appearing on Death Gun’s face was about the only scene here done correctly.