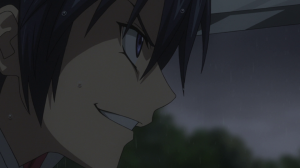 When was the last time we had a shojo series that didn’t have the family try to disrupt their daughter or son’s marriage? It adds drama but this was ridiculous, where Nike’s father and mother sat idly by while this was going on behind the scenes.  What in the world was this?  A positive however, would be how much the sisters, were just like Nike they even helped Livius, which was a great use of family relationships, and how similar sisters can truly be.

The grandmother and Kitora being upset that Livius will take advantage of Nike’s rain power to overcome other kingdoms, their reasoning was pretty poor here– Nike get’s locked up by her childhood friend who supposedly has romantic feelings for her,, this just doesn’t make sense at all!  It’s predictable how this series will end, and yet the writers or rather the manga author chose to not development a different kingdom as the final villain here!?  Kitora is the worst character in this series, as he sees her love locked up and crying wanting to help Livius, he has this look of regret on his face.  Even Skip Beat! being serialized in the same magazine [Hana to Yume] as Soredemo had much better drama than this!