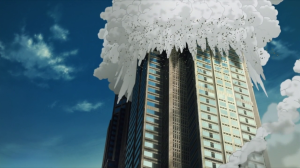 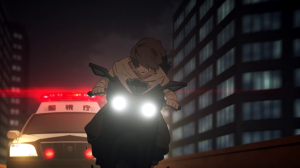 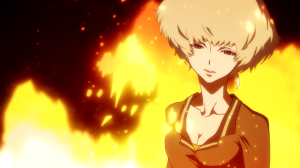 Bless by Arnor Dan is one of the best insert songs I’ve heard all year and such incredible direction!  This was without a doubt one of the best series to air this entire summer season, and I stand by what I’ve said previously– Zankyou no Terror is the best work that Shinichiro Watanabe has ever done.  Now, only time will tell if this still rings true as we’ve still got the final episode of Space Dandy [Watanabe’s other work] to air.  I also stick by what I’ve said about the music production of this show: This is Yoko Kanno’s most compelling soundtrack of her entire career!

As stunning as the visuals and the score have been, for Zankyou it isn’t much about what’s being shown on screen rather than what is the underlining meaning behind it all.  As I have said many times before, Zankyou is a show that leaves nothing behind, it does its research [thermite reactions, dismantling a bomb, to the scenes of the bombings].  VON means ‘hope’ in Icelandic and from what I’ve gathered here, is that Sphinx didn’t want to harm anyone.  All they wanted was to be noticed after being neglected and tossed aside in a misguided attempt to improve the structure of the country.  Sphinx’s goal– the collapse of current-day Japan, a society that loosened up after World War II, separating itself from being a strong nation into one that could revitalize itself by starting over–a step, although a primitive one, so to speak, was an attempt at justice or perhaps, revenge.

Nevertheless, it took a year to regain what Sphinx had done, and it is their cause that gave the youth of Japan a voice.  Miyami and Aoki wanted to dismiss Shibazaki’s investigation into the Athena Plan, so when Miyami questioned Shibazaki about whether or not he would go to the authorities, it was a two-sided endeavor.  One that wasn’t meant just for the adults in this show but for the kids as well.  Quoting Miyami here further establishes this:

“…no more than a small voice in the midst of a storm. That voice will disappear before it reaches anyone.”

Mukasa also clearly pointed out a crucial piece to understanding Sphinx a bit further very early on.  If I recall it was around Episode 3 where he says,

Kids that were stripped of their childhood, as well as the very will to live.  We see this theme strongly hinted at with Five’s personality.  Hellbent on tracking Nine down, to beat him at his own game, and this episode, illustrated very well the impact she made on the FBI.  They didn’t want these kids doing whatever they wanted and pulling a trigger on a bomb anytime, anywhere.

However, this is one of the issues I have with this series.  Five is a very clichéd villain in that she’s got a temper that feels completely out of place for the FBI, and when she goes overboard at the airport putting a bomb on a plane, why wouldn’t the FBI just stop her?  Why did Clarence even go along with her plan to capture Nine?  There were so many inconsistencies with the FBI and her character that it felt rather forced just to push this story quickly ahead.  If Five had to be in this at all, she should have been eliminated after her decision on the airport situation.

We saw throughout this show, that young people were utilizing technology so prevalently that they (just as the children from the Settlement) had forgotten how to interact with each other, whether forced by higher-ups or societal change.  I do want to point out that Mukasa playing his video games largely indicated this.  I was surprised to find that this was the real meaning behind Sphinx’s actions– a vital theme to the very end.  To renew Japan to a time that would not allow for such atrocities to occur were in the words of Shibazaki:

“A long time ago, when I was young, there were teenagers who threw rocks at the riot police and fought against the government. Even though Sphinx are called terrorists now, in a different time… they might’ve been called something else.”

Looking back, the English title Terror in Resonance isn’t even about the explosions Sphinx set off throughout Japan but in how everyone in this series had a role that would be detrimental to the progression of the story.  Shibazaki a washed out detective who is at the tip of a government conspiracy would only unravel into injustice in order to release himself from his past [Shunzo Miyami’s death].  Kurahashi maintaining his position as chief of the Japanese police all the while staying on the good side of the FBI, the wrecked home and school life of Lisa accurately depicts her gradual transition throughout this anime between depressed teenager to a young woman searching for a subtle and sweet acceptance from terrorists [Nine and Twelve].

Even the FBI tries to stand firm in taking over for the Japanese police in recovering the atomic bomb, while for a while there it worked but Five ultimately shook this up quite a bit.  They didn’t want to make it known that they had been a large part of Japan’s underhanded plan to whisk children away in order to not just improve the country but the possibility of enhancing the populace worldwide.  Considering how this plan had backfired the mass media couldn’t know about their involvement thus resulting in the astounding repercussions at the Settlement with Nine and Twelve in the final episode.

In short Zankyou no Terror is a stunningly beautiful piece of art in the anime industry:  A heart-felt nihilistic journey towards retribution that is just a slight take on the modern-day issues of terrorism and corruption.