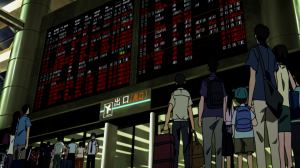 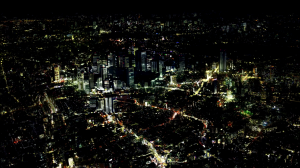 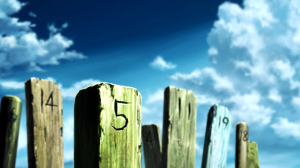 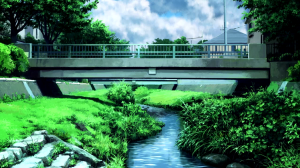 Where do I even begin with writing this​, let alone my final impression?  I had to re-watch this episode ​several times to get a handle on how I felt about it.  I will ​let this out of the bag right now​; this was an exceptionally beautiful episode.  Zankyou no Terror has been a most ​p​assionate piece,​ ​at every scene, and now that we’re at the end of it all​, if I​ could sum it up in one phrase it would be that:

“This was the most visually stunning and realistic ending we could have had.”

Nine and Twelv​e ​​(​since the very beginning​) ​were on an unclear mission with strict​, self-imposed​ rules they chose to follow. ​No casualties was their modus operandi​, ​​they were intent to ​ensure not to attract attention to themselves if at all possible at least in the beginning.  The pair began their journey only they knew where it would end​.  It’s here, where every riddle and bomb (including the final act by Sphinx) evolves society as a whole.  Every bombing had to be solved [thanks to Shibazaki’s intuition] and it isn’t until Episode 3 that we (as the viewer) take note of this so early on.

Was this the right move on Director Watanabe’s part?  Although they could have gone different ways here, the biggest change would have been to turn this into an Urobuchi-scripted series wherein people die, left and right, as Aldnoah.Zero is doing with the mecha genre, but that wasn’t the writer’s intention here.

Watanabe and his team (especially with this final episode) chose to captivate its audience with a variety of emotions.  The story was very sad in that the aftermath of what Nine set out to do with the atomic bomb resulted in so many casualties. However, the end result of Sphinx was that they just wanted attention for being cast aside by the very country that took them in.  That shot of Nine riding the elevator up to the top of the tower depicted a breathtaking realization for his character in that there really was no turning back for either of them.

Just as Five wanted Nine to live out his life for her, Nine wanted Lisa from the very beginning to remember Sphinx by living–as did Twelve.  Powerful stuff right here!