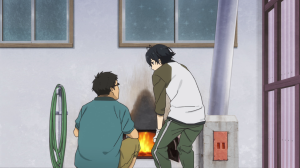 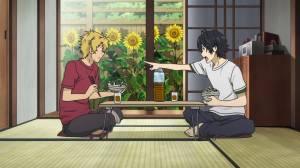 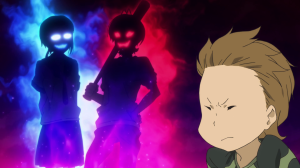 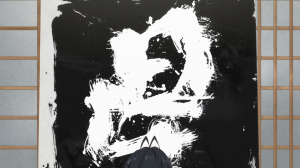 This wasn’t as good as what we had previously but still is was quite funny.  The Tarzan scene with him and the kids just reflects again how much he tries to be a part of the small town as everyone else is.  Kenji Kawaii when is this guy going to do something grand for this show?  He had done some amazing work on Higashi no Eden and ended up having one of the best soundtracks in 2007 with Seirei no Moribito.  On top of that he created a very alluring score for the original Ghost in the Shell film, but what is it with this show?  It doesn’t have the gumption that those shows had with their music–  it’s a shame really, because he’s got so much talent and even in this episode we’re left with only a few tracks and some used more than once!  Some of the background music felt out of place for a few of the scenes here, and it left me wondering why was it directed like this?

As for the story, it was more of the same, Seishu spends time with the town’s people to find the inspiration he needs to create an original calligraphy piece.  The only section of this I enjoyed was when he got lost and looked up in the sky to find exactly what he was looking for, and what he wrote perceives just what he feels.

The ‘Star’ he writes signifies his desire to fit into the village, and make himself known with an entirely original and unique style in the world of calligraphy.  This was a nice to see this played off of.  The ending after the credits creates a possible change of atmosphere and pace.  Hope he really ends up heading to Tokyo for this next episode.