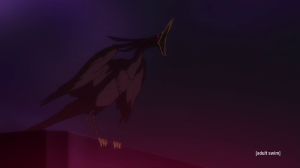 Smart move to have the original team behind this series construct the final episode:  Shinichiro Watanabe, Shingo Natsume and character designer Yoshiyuki Ito, because this was all crafted together incredibly well!  This had more tie-ins than any other episode we’ve had previously, and a great send-off to the spectacular pompadour adventures of Dandy and his “brave space crew”.

Bea’s identity was one of the more surprising twists this episode had let alone this entire series as it added some drama to all the comedy we’ve had!  As one of the first characters aside from the main cast to show up in another episode, Johnny reappears to battle the Golgol empire and Dandy turned down God’s offer just so he can go to boobies?  Haha, this was very awesome, in that this was the second time Dandy competed against God:  first time was when he was playing the Dandy quiz against the chamelionian.

Watanabe, you sure created a classic sci-fi comedy series here–  Dandy an alien hunter doesn’t contain DNA but a large amount of pionium that Dr. Gel is after and now that he’s captured what will happen to the universe?  Undoubtedly, this episode had the most fluid animation out of all Dandy stories we’ve had–  all the mecha fights shown on screen and the little Aloha Oe race were drawn well!   This was the first entry into Space Dandy that held onto a solid continuation from last time, which has been a plot thread slowly entering its way into these episodic and sometimes obscure narratives since the beginning!

I can now see why the slightly silly scenario of Hiroshi being de-friended by Jack on Twitter had become a shoe in towards developing the overarching plot of Dr. Gel’s vested interest in the pionium within Dandy.  If there was one part of the last episode that segway into this finale that I enjoyed the most it was Professor Duran’s explanation of pionium and why the baseball was attracted to Dandy.  That entire court episode was just buildup for the large-scale inevitable war that was to happen since the very beginning of this series.   Even the first episode had a small detail of the Jaicro and Golgol Empire war, and one line that points so clear to how this ending would have occurred where the narrator was tired of describing the different aliens and Dandy’s rather undertone response:

Also, what is a Dandy tale without its use of anime references, connections to social media, and the use of a ton of cultural influences?  Cowboy Bebop fridge from Toys in the Attic episode once again made an appearance here, but that wasn’t the only Bebop homage we had in this finale!  the Tree of Life from Hagane no Renkinjitsushi [Full Metal Alchemist] Vicious’s bird from Cowboy Bebop showed up right at the beginning, Dr. Gel towards the later half looked a lot like Jet of Bebop, Admiral Perry’s true form was the co-founder of Google Larry Page.  This spouted out some very hilarious situations!

I think if we did not have the two episodes about Honey and Scarlett I feel this would not have had the impact it would have had–  I say this because we saw how much they didn’t want Dandy to die because he was rare from their own experiences.  Tip of the iceberg here with that development as Honey’s amazing piloting skills referenced episode 7 greatly here!  This is how to develop your characters!

Hands down this was the best ending of the season, as it was a rather satisfying conclusion to Dandy, Meow and QT’s wacky adventures through space.  Or was it?  The story comes full circle back to before Meow joined the crew and the only things that have changed are Dandy’s memories of the universes he experienced before, and his love of legs instead of the booty.

The way the writers ended this here, they could possibly do another season of this following the manga chapters as I’ve read those and can very much imagine the voices playing across the pages.  I would even be satisfied if they were OVAs.

I hope you can keep your words Watanabe and make another season after that ‘May be continued?’ message, that was such a tease.