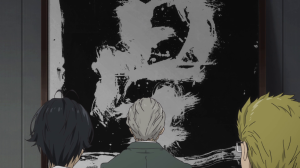 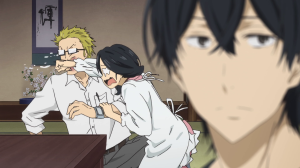 From the director of Tokyo Magnitude 8.0, .Hack//Quantum—  Masaki Tachibana started out as a storyboard artist for popular series like Ghost in the Shell Stand Alone Complex and Noir, and even Bee Train’s Wild Arms Twilight Venom series.  I’d say though his two best works was on Tokyo Magnitude 8.0 and Serei no Moribito.  This guy has grown quite a bit from his previous works in that now he’s been able to adapt a decent and well-written comedy manga about a calligrapher.  My initial impression of this show was that i’d be how Moyashimon took the elements of an agricultural university and channel it as educational.  I was dead wrong on this:  this was a lot more than that.

As for Kenji Kawai, the music composer of Barakamon, this had to be one of his least favorites out of his repertoire.  He loves using passionate sounding stringed instruments synthesized horns and keyboards that often times in this show leave a less than powerful impression on a lot of the dramatic scenes.  This guy should stick with sci-fi, action and adventure shows to compose to.  Higashi no Eden, Serei no Moribito and the original 2005 Fate/Stay Night TV series had awesome soundtracks for the kinds of anime they were, but for Barakamon‘s realistic portrayal of life on an island it was lacking in every regard.

Here we’ve got this washed-out calligrapher named Seishu Handa whom ends up being sent off to the Goto Islands by his father to reinvent his work.  The first few episodes were very light-hearted as it gives this view of village life with its wildly-driven people.  If there was one aspect of this show I did not like it was how much it neglected the process of calligraphy and what it takes to become one, this show seemed to have sidelined the details in that.  As a comedy show however, this was for the most part very funny.  Naru provides this authenticity of innocence, and wild naivety that pushes the envelope most of the time for Seishu in evolving into more of an adult.  He’s slowly earning a respect from a child nonetheless that he was never given by any adult as a respectable calligrapher: and throughout these episodes this theme greatly reflects this.

A wildy entertaining series as it progresses, with portions of the episodes laid out in halves between catching fish, finding bugs, painting on a boat which in turn ultimately develops and builds Seishu’s greatest work by the end of it all.