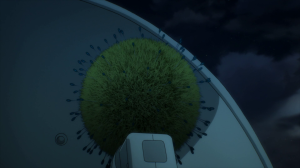 When was the last time we had an actually decent anime series handle the genre of body horror?  I can’t really recall many shows aside from Gantz, BERSERK and the OVAs Gyo and Genocyber.

This was a marvelous first episode and the plot was fantastic! The animation was so fluid especially in those scenes with Migi and even the music at times had this dub step feel to it that allowed for the otherworldly aspect of this show seep through. It was so good!  Ken Arai, is this the first time he’s composed music?  Because I’ve never seen him compose before as he’s always doing background art.

I’m not worried about the pacing at all with this show now, because we got a good look at Shinichi’s parents alongside the background of what the other parasites are doing to humans.  Frightening events that carry over strongly by having bright animation that distracts the viewer from what is really going on.  After having seen this episode, Kiseijū has a ton of potential to be great let’s just hope this new director can pull this off.

OP: “Let Me Hear” by Fear, and Loathing in Las Vegas:

I did not like this at all, the heavy rock instrumentals and screaming vocals detracts away from the gorgeous visuals we had on screen here.  They should have used something more somber than this high-adrenaline song.  BUCK-TICK or MONORAL would have been great here.

This was one of the better endings I’ve seen with those slowing-paced backgrounds and light lyrics illustrates the humanistic aspect of this show.